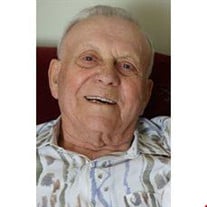 It is with great sadness that we announce the passing of Andy Grum on February 26, 2016 in his 89th year. He was much loved by his wife Ludmilla for 56 years.Loving father to Rose Mary, Andreas and daughter-in-law Colleen; cherished by his grandchildren Colin and Carolyn. Andy was a man who enjoyed life to the fullest. His greatest pleasure was in doing for others. When he came to Canada as a young man, he began a long career in carpentry, initially working at Valley City before moving on to Dofasco. His skills allowed him to build his own home and later renovate his childrens’ homes. He built furniture for his family and friends, leaving a part of himself in each of their homes. Andy enjoyed both watching and playing sports. He was an avid supporter of the Hamilton Tiger Cats. He enjoyed bowling for the Dofasco and Dundas bowling leagues. He was a proud member of the Ancaster Lawn Bowling Club and the Dundas Curling Club. When he was younger he enjoyed annual fishing trips to his brother-in-law's cottage. Andy believed in giving back to his community and volunteered with Meals on Wheels for many years in his senior days until he himself was physically unable to continue to do so. He was also known for making his own wine and never forgot his heritage in making sauerkraut every year (both of which he consumed with much enthusiasm). Andy was adaptable with the times and learned to use a computer in his retirement. He spent many leisure hours playing the computer games his son got for him. Recently his love of reading moved from the paper variety to the e-reader. He loved animals, especially his daughter’s dogs (his furry grandchildren), and they all had great affection for him. He was always there for his family and put them above all else. He supported his children in their endeavors even when he didn’t agree with them. Andy was especially fond and proud of his grandson and granddaughter. Andy’s philosophy his entire life was that things would always get better. He believed the best in people and in lifes’ circumstances. He was always ready with a joke and will be remembered for his sense of humour, infectious laugh and love of family and friends. The family will be receiving friends at Circle of Life Cremation & Burial Centre(100 King St. East, Dundas) on Sunday March 6, 2016 from 2 – 4 p.m. and a service will be held there on March 7, 2016 at 11 a.m.

It is with great sadness that we announce the passing of Andy Grum on February 26, 2016 in his 89th year. He was much loved by his wife Ludmilla for 56 years.Loving father to Rose Mary, Andreas and daughter-in-law Colleen; cherished by his... View Obituary & Service Information

The family of Andreas 'Andy' Grum created this Life Tributes page to make it easy to share your memories.

It is with great sadness that we announce the passing of Andy...

Send flowers to the Grum family.