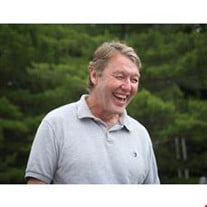 David Hamilton Sparling died of brain cancer on July 31, 2016. He was not ready to die and fought against it with every fibre of his being until the very end. He loved life and lived it to the fullest. His parents, Hamilton and Betty Sparling, raised their family, including Dave, his sister Lynn and brother Ron in the small town of Shawinigan, Quebec. Dave had so many fond memories of his childhood there and had an unlimited number of stories about the shenanigans that he and his lifelong friends got up to. He attended Queen’s University and those were some of the happiest years of his life, largely because of the friends he made there. His Queen’s buddies rallied around him during his fight against the disease, encouraging and supporting him. It was at Queen’s that he met Jane Kersell. It was a case of love at first sight and they spent the next 44 years together. He never once forgot the anniversary of their first date and was an incredibly loving husband. They had four children whom he adored: Beth (David Lee), Laura (Jeff Newberry), Julie and Cameron. He brought so much fun and happiness to their lives and they always felt loved. He was thrilled to meet his two grandsons, George Lee and Hudson Newberry who gave him great joy in a very short period of time. Some of Dave’s favourite moments were spent with his family at their cottage on Georgian Bay. Swimming, skiing, sailing, horsing around and the obligatory renovations kept Dave, Jane and the kids happy. His working life began on a farm in Cambridge where Dave operated a broiler chicken business. He soon became restless and returned to school, this time in business. He never looked back. He completed his PhD and began a career that filled him with joy and enthusiasm every day for the rest of his life. He was a Professor and Associate Dean at the University of Guelph before he was hired by the Ivey Business School at Western University. At Ivey, he was a Professor Emeritus and Chair of Agri-Food Innovation. He was an excellent teacher because of his passion for his subject and his keen interest in his students. He took the greatest pleasure from getting to know them and helping them achieve their goals. He was inspired by his colleagues at both Guelph and Ivey; his sparkling personality and fun-loving attitude enlivened both faculties. In addition to academia, he worked with government and industry in the Agri-Food sector and made significant contributions to both. He travelled the world teaching agri-business executives and operators of large-scale farms. He was in his element, loving every moment. Dave had a very sharp wit and was quick with a joke in any situation. He had the ability to make people laugh so hard it made their cheeks ache. Every party and event that he attended was more fun because he was there. His smile was infectious and his goal every day was to make someone else’s day better. He had so many, many friends who stood by him over the last 22 months. Their kindness, generosity and unending support were a tribute to them and to him. Dave’s death has taken some of the light and laughter out of the world. He will be missed by everyone who knew him but, especially, by his wife, Jane and his children whom he loved so much and who loved him. If you wish, donations may be made to the Juravinski or Princess Margaret Cancer Centres or to the David Sparling Scholarship Fund at the Ivey Business School.

David Hamilton Sparling died of brain cancer on July 31, 2016. He was not ready to die and fought against it with every fibre of his being until the very end. He loved life and lived it to the fullest. His parents, Hamilton and Betty Sparling,... View Obituary & Service Information

The family of David Hamilton Sparling created this Life Tributes page to make it easy to share your memories.

Send flowers to the Sparling family.