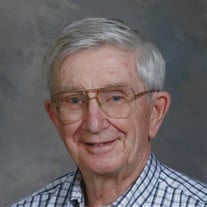 Don’s earthly life ended on Sunday, February 24, 2019. He was born May 21, 1931 in Winnipeg and was predeceased by his parents and sister Alison. He graduated from the University of Manitoba with a degree in Mechanical Engineering, and continued his education on a two year Athlone Fellowship in England, where he and his wife Norma were married. Don’s loving family includes his daughter Katherine (Kay) (Don McVeigh), sons Peter (Judy Trout) and Gordon (Denise Mantle-Young), and grandchildren Jack McVeigh, Danielle and Graham Young, and step grandsons Jeremy and Jordan Haynes. He is also mourned by many nieces and nephews and extended family. Don was a gifted engineer whose name is on many patents. Much of his working life was spent designing specialized machinery as a consulting engineer for Byrne and Associates in Burlington, where he worked on a wide variety of projects. One, the design of the Big Chute Marine Railway, led to a consuming interest in sailing. He went on to work for INCO in Sudbury, where, as Concept Development Specialist, he designed machines for underground mining. He was such a keen engineer that after mandatory retirement, he opened a home consulting firm, Design/DDY, and continued to work for another thirteen years. He inspired his two sons, Peter and Gordon and his eldest grandson Jack to follow him into the engineering profession. Don enjoyed many hobbies and interests. He was an avid skier and sailor. He and Norma sailed competitively at the Royal Hamilton Yacht Club, where he served as Commodore during its 100th anniversary. They later sailed Wind Dancer, a 33’ Mirage, at the North Channel Yacht Club. Photography was a lifetime passion. Don was also a gifted woodworker. He designed and built furniture and made frames for many paintings. Genealogy became a consuming interest as he traced his roots back to the 1700s. He was a devoted member of the church, serving in many capacities. Visitation and a Celebration of Don’s life will be held at St. Mark’s United Church, 1 Lynndale Drive, Dundas, ON. Visitation: Friday, March 8 from 7:00 pm to 9:00 pm. Service: Saturday, March 9 at 11:00 am. If you wish to honour Don’s memory, donations to St. Mark’s United Church in Dundas, St. Peter’s United Church on York Street in Sudbury, or to the Alzheimer Association would be appreciated by the family. https://alzheimer.ca/en/on https://www.stmarksunitedchurch.ca/ http://www.stpetersunited.ca/

Don&#8217;s earthly life ended on Sunday, February 24, 2019. He was born May 21, 1931 in Winnipeg and was predeceased by his parents and sister Alison. He graduated from the University of Manitoba with a degree in Mechanical Engineering, and... View Obituary & Service Information

The family of Donald Duncan Young created this Life Tributes page to make it easy to share your memories.