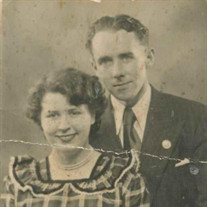 Frank passed away peacefully on Friday, July 10, 2020, at Juravinski Hospital. Francis Kidd was born in Greenloaning, Scotland on October 16, 1928. He is survived by his loving wife Mary (Maureen); children Frances (Dan), Kim (Ed), and Steven (Hamish); grandchildren Dylan (Lindsey), Haley (Beau), Katie and Hannah, and great-grandchildren Henry, Libby and Vivienne. Thank you to the staff at the Georgian for the great care and kindness they showed Frank in his final days. Before he came to Canada, Frank was a member of the British Army in the RASC and was involved in the Berlin Air Lift. Frank and his love, Maureen, married in 1952 and immigrated to Canada in 1956. Frank was a loyal employee of Dofasco for 35 years, where he worked as a millwright and diesel mechanic. Frank and Maureen raised their children in Hamilton, where they remain. Frank and Maureen also enjoyed many great years in Florida with their friends. Frank was a quiet man of few words. He was a devoted husband and father who always put others before himself. Always the hard-worker, Frank could often be found gardening and building things around the house. Frank was a true Scotsman who loved golfing, a cold beer, and spending time with friends and family. An honest man here lies at rest, As e’er God with His image blest: The friend of man, the friend of truth; The friend of age, and guide of youth: Few hearts like his, with virtue warm’d, Few heads with knowledge so inform’d: If there’s another world, he lives in bliss; If there is none, he made the best of this. - Robbie Burns A memorial mass will be held for Frank at St. Augustine’s Parish at 58 Sydenham St., Dundas on Wednesday, July 15 at 11 am. Seating will be limited, and the family asks that those who attend wear face coverings and maintain physical distancing.

The family of Francis (Frank) Kidd created this Life Tributes page to make it easy to share your memories.

Send flowers to the Kidd family.