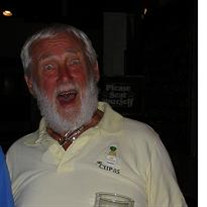 Rev. Miller, Frederick Ernest. Husband of the late Jane Mary Cater of Chile (Aug 1980) and father of Christina, Stephen (Carole) and Richard (Dena), grandfather to Nicolette (Steve), Kasper and Kiefer, Jessica and Jack. Later married to Caroly Laurie of Walcha, Australia, NSW; survived his half siblings Tom Fawdry (Anna), and Carol Kenney (Bob). Pre-deceased by his brother Bobbie. Born in Winnipeg to Ernie Miller of Carmen, Manitoba and Thora Hallgrimsson of Gimli, Iceland. Freddie and Bobbie were soon on the move when iIllnesses suffered as a result of WW II had taken father Ernie. Thora took the boys to her home land of Iceland. Both boys were then educated in England at St. George's of Harpenden. It was at St George's that Freddie was introduced to the game of Rugby. The game would dominate his life, as a player, a team builder and referee. Along with others, he co-founded Rugby in Ontario in the 1950's, founding the Toronto Wanderers, Toronto Nomads, and Ottawa Beavers and subsequently the Toronto XL’s later as over 40's rugby took hold. A founding member of ‘The Scrum Club’ at Fletcher’s Fields in Victoria Square and an early Inductee to the Ontario Rugby Hall of Fame. A true second row player and this is where we think The Good Reverend learned the words of ill repute. Ordained in 1967, he presided at numerous Marriages, Baptisms, Memorials and Funerals. He served the congregations of St Philip's, Unionville, Christ Church, Stouffville, The Church of the Holy Trinity, Toronto; as well as within the Detention Centres, Hospitals and Homes for the Aged. He brought Christmas Carol singing to the Rugby community. World travel continued throughout his life circumnavigating the globe numerous times. He touched many lives on his wanders. As a Publican, (Duke of Richmond, Hop and Grape, and The Jack Russell of Toronto) he extended his good nature and ministry combining good pub service and words of care and wisdom. A Celebration of his Life will take place at 11 am on Saturday, May 27, 2017, at Fletcher’s Fields, Victoria Square, 2743 19th Ave. Markham, ON, as the teams he co-founded will kick off to begin the rugby season. You are welcome to donate to Amnesty International; a justice initiative that was near to his heart. In lieu of flowers, drink beer! http://www.amnesty.ca/donate

The family of Reverend Freddie Miller created this Life Tributes page to make it easy to share your memories.

Send flowers to the Miller family.