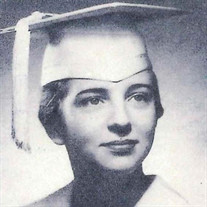 Not sure what to send?

Gisele passed away peacefully on Wednesday January 12th, one month shy of her 85th birthday. Beloved wife to Robert for 62 years; dear mother of Michael (Sharon) and David (Colleen); aunt to Tim (Ruth), Denise (Dean) and Mark (Heather). Predeceased by her aunt and uncle Anne and Sylvio Pinsonneault. Cousin to Annette (Jack), Felix (Pauline), Gerrard (Marylin), Luke (Betty), Adrian and Michelle (Don). Gisele was born an only child to Henri and Luella (Pinsonneault) Desilets, in Windsor ON. Her dad died when she was three years old, so she was raised by her fiercely independent and devout mother. Gisele was ahead of her time as she would not accept the notion “it’s a man’s world” without pushback. Fully bilingual, Gisele attended St. Mary’s Academy in Windsor where she met her life-long friend Sr. Suzanne Malette. While in university in Windsor in 1956, she met her husband, Robert. She graduated with a Bachelor of Science in Chemistry jointly from the University of Windsor and Wayne State University in Detroit 1959. That same year she married dad and they moved to Sault Ste. Marie, ON which she found somewhat colder and snowier than Windsor! She still worked in her field in Soo, MI during their time up north. Both her sons were born in the Soo and Gisele got her wish for a warmer climate when the family moved to Burlington in 1969 because of Robert’s business transfer under the successful guidance of Murray McCallum (Barbara). Throughout, she effectively balanced raising her family and working in her desired field as a medical technologist at St. Joseph’s Hospital and the lab at Dofasco. Gisele was always a very active person, involved in various clubs, such as the Newcomers, and fundraising activities including The Canadian Cancer Society, The Heart and Stroke Foundation and the Catholic Women’s League. She also volunteered for the Paralympics in Montreal in 1976. Unwilling to sit still and let life pass her by, Gisele remained active throughout her life. She loved to cook, power walk, curl and golf amongst other things. A weekly game of bridge with “the ladies” (Jean Ellis, Peggy Mair, Cathy Waugh) was always a date. She also enjoyed a good read with a nice glass of white wine. In her later years, she enjoyed travelling the world with Robert, collecting many souvenirs and memories. The family would like to extend thanks to the staff at Sunrise Senior Living in Burlington for helping to make Gisele’s final months comfortable. Cremation has already taken place and a funeral mass will be celebrated at St. Gabriel’s Church in Burlington on Tuesday, January 18th at 10:30 am with private interment to follow. In lieu of flowers, the family would suggest donations to the Canadian Cancer Society, the Heart and Stroke Foundation or the Joseph Brant Hospital. https://cancer.ca/en/ https://www.heartandstroke.ca/ https://jbhfoundation.ca/?_mid_=18591

The family of Gisele Marie Anne Stortini created this Life Tributes page to make it easy to share your memories.

Gisele passed away peacefully on Wednesday January 12th, one...