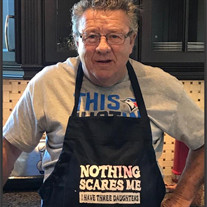 Gordon W. Jackson, age 81, passed away peacefully on Wednesday, January 27, 2021, at St. Joseph’s Hospital in Hamilton, ON. Gord was born August 8, 1939, in Brantford, ON to the late Gordon Jackson Sr. and Mary Jackson (née Hamblett). He is predeceased by his brother, Peter, and sisters, Nancy and Bonnie. He is survived by his brothers, Dan (Sarah) and Mike (Bev). Gord married his sweetheart Dorothy Biederman on February 12, 1960. He is survived by his wife, Dorothy, daughters, Cindy LaVallee (Kevin), Kimberly Tuckwell (Jim) and Jane Jones (Steve), 5 grandchildren, Mandi, Mike (Ashlee), Matt (Dominique), Kevin, and Trevor, and 5 great grandchildren, Chase, Bailey, Carter, Owen, and Rilyn, as well as numerous nieces, nephews, and cousins. Gord started his printing career as a delivery boy for Hurley Printing when he was just 15 years old. Over the years, he worked his way up to Plant Manager before he left there to help start up Distribu-TECH. After his retirement, he and Dorothy traveled as much, and as often, as they could. They bought a 5th Wheel and headed south for cold months and enjoyed the summer months in Ontario. When that chapter ended, they settled in Dundas. Gord truly lived life to the fullest through simple pleasures; chatting with friends and family and playing his keyboard. A special thank you to the ICU team at St. Joes. What an amazing group of professionals. We will have a Celebration to honour Gord’s life at a later date.

The family of Gordon Walter Jackson created this Life Tributes page to make it easy to share your memories.