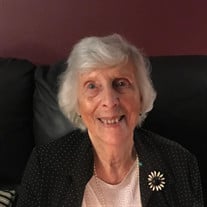 Gwen was born in Birmingham England; she was the second of five children born into the Hale family. She lived her teenage years during the second world war where spending nights in a bomb shelter was common, and twice she and her family emerged in the morning to find their home damaged from bombing that had taken place through the night. During the war she met and married Arthur James Beach (Jim). Shortly after their marriage, Jim was sent to Egypt to serve as an airplane mechanic in the British Royal Air Force. They spent the next two years apart, only communicating by regular letter writing. After the war, Jim and Gwen decided to immigrate to Canada where they settled in Edmonton, Alberta. They soon found jobs and began contributing, as so many post WWII immigrants did, to building the country that they now called home. Gwen spent most of her working life as a payroll clerk at Fabric Care Laundry and Dry Cleaners. She and Jim waited twenty-one years before their first child, a son, was born to them. They were wonderful parents, good neighbours and committed friends. They loved to spend time together, and with their many friends, dancing and enjoying a drink at their local Legion. When they retired, they moved to Victoria, B.C. where they continued to enjoy their life together with many friends and family members. Jim passed away in 1991 and Gwen was forced to make a new life without her best friend and life partner. She did a lot of charity work with the Ladies’ Auxiliary of the Pro Patria Legion of Victoria. After open heart surgery in 2004, she decided to move to Ontario to live with her son and his family. For the next sixteen years, she served her family, faithfully doing household chores and loving her grandchildren, daughter-in-law and son. Gwen was a steadfast, sweet presence who was well loved by those who knew her. Her greatest joy was to care for family and spend time with her beloved Jim. Her life was well lived and while her family will be forever grateful for the memories and legacy that she leaves behind, her presence will always be missed. Gwen was predeceased by her four siblings (Vera, Francis, Roland and Fred), and her husband Jim. She leaves her son Lee, her daughter-in-law Joanne, and her grandchildren Joshua and Alexandra, and grandson-in-law Gerrit. She will also be missed by her extended family (the Gould clan) Louella (Bob, deceased), Gerry, Leah, Caleb, Amanda, and Dylan. Also, her nieces Pauline Moulsdale and Hazel Waters, and her grand niece and nephew Kylie and Brandon Waters. A family memorial service will be held to celebrate Gwen’s life.

Gwen was born in Birmingham England; she was the second of five children born into the Hale family. She lived her teenage years during the second world war where spending nights in a bomb shelter was common, and twice she and her family emerged... View Obituary & Service Information

The family of Gwendoline Beach created this Life Tributes page to make it easy to share your memories.

Gwen was born in Birmingham England; she was the second of five...