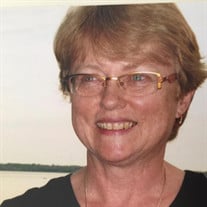 Forever in our hearts, Heather left us peacefully on Tuesday, September 15, 2020 after a three-year battle with breast cancer. Generous, kind, thoughtful and selfless, Heather was a friend to all who were lucky enough to cross her path, whether as a family member, a journalist, a broadcaster, a communications specialist, a student or a teacher. She encompassed all those aspects in her 65 years on earth. Heather was born in Regina but spent the early part of her life in Calgary, the third of four children born to Jack and Kay Pullen. Her formative years were a whirlwind of achievement, whether it was academics or athletics. A straight-A student, Heather swam competitively at the Winter Club and built a solid golf game at the Elks Club. Soon enough, her dad introduced her to skiing and she left her mark at Mount Norquay, Lake Louise and Sunshine. She dreamed of a career in journalism and made that dream a reality when she graduated from Carleton University’s honours journalism program in the spring of 1977. Her first job after graduating was a short stint at a startup newspaper called Ottawa Today. The newspaper didn’t last but it was during that time that she met her future husband, Ken Fidlin. They were married in August of 1979 and spent the next 41 years in a marriage filled with love and happiness. Her second job was a 10-year stint at CBC Radio where she eventually became one of an elite group producing documentaries for the network’s flagship program, Sunday Morning. In 1987, she made an abrupt career shift, leaving CBC behind for a job as a communications specialist at Toronto General Hospital. That opened the door to 30 years of health care communications, including 13 years as Manager of Public Relations at Hamilton Health Sciences. She loved being part of a close-knit team working in a public service setting. Heather particularly treasured the final chapters of her career when she went back to university in 2007, at the age of 52, to join the very first cohort of McMaster University’s Master of Communications Management program. She cut such a wide swath as a student and, later, a teacher in the program that they established the Heather Pullen Pathfinder Fund, to sponsor student research and learning in the MCM program. Heather leaves behind her husband, and two sons, Tyler (Megan) and Samuel, granddaughter McKenzie Fidlin, brothers Stuart (Lola) and Richard, brother-in-law David Dacyk as well as nieces Amanda Dacyk (Dan Dorey) and Valerie Onischuck (Bo). She was predeceased by her parents, Jack and Kay Pullen, and her beloved sister Carol. Heather also played an important role in the Fidlin clan, bonding with Ken’s late mother Dorothy, his five siblings, their wives, husbands and children. The family would like to thank Dr. Richard Tozer, Heather’s brilliant oncologist who shot every arrow in his quiver to try to save her. We also owe a debt of gratitude to the hundreds of medical professionals who contributed to her treatment at the Juravinski Cancer Centre. We are indebted to the Victorian Order of Nurses, and nurse Jenny Voisin in particular for their professional, compassionate care. In lieu of flowers, Heather requested that donations be made to the Heather Pullen MCM Pathfinder Fund at McMaster University. You can do that directly through this link: https://bit.ly/32E8lkl A funeral will be held on Saturday, October 3, 2020 at 2:00pm in the sanctuary at St. Paul’s United Church, 29 Park St. West, Dundas ON. Livestream viewing of the service will be available on the Church website (stpaulsdundas.com). Due to COVID-19 space restrictions, family and friends who wish to attend the service in person, in the Church sanctuary, are asked to register by September 30th by email to [email protected]

Forever in our hearts, Heather left us peacefully on Tuesday, September 15, 2020 after a three-year battle with breast cancer. Generous, kind, thoughtful and selfless, Heather was a friend to all who were lucky enough to cross her path, whether... View Obituary & Service Information

The family of Heather Joan Pullen created this Life Tributes page to make it easy to share your memories.

Forever in our hearts, Heather left us peacefully on Tuesday,...

Send flowers to the Pullen family.