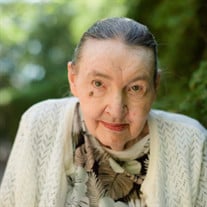 With sadness we announce the passing of Ingeburg Gertrud Scheffler (n?e Eichelbaum) in her 85th year, with her sons at her side, at Shalom Village. We are comforted our mother has found the peace she sought for a very long time. Survived by sons Ron (Kuei-Feng) and Ken in Hamilton, siblings Erika, Waldtraut, Christel, Lothar, and Hartmut in Germany, sister-in-law Elfi in the USA, and many nieces, nephews and their families in Canada, Germany and the USA. Predeceased by husband Eckhard, parents Bruno and Erna, older sister Gerda, and beloved cat, Mushy. For those who knew her, Inge was a kind and industrious person who loved to cook, knit, sew, draw and craft. She was most in her element at Christmastime. A tireless correspondent, she maintained strong connections with family and friends both locally and across the globe. Her soft-spoken, reserved and seemingly delicate, self-effacing nature belied an inner strength that helped her endure hardship and pain that eventually took a mental and physical toll later in her life. Born the third of seven children in pre-war West Prussia, Germany, Inge lived in and around the historic port city of Elbing. Following the war, her adolescence was spent in the seaside town of Cuxhaven, Lower Saxony. Through necessity at a young age, she found work as a cook in hospital kitchens across West Germany, including Gummersbach. In 1968 she immigrated to Hamilton and worked in the kitchens of the Undermount Dining Room and Tamahaac Club and as a nanny for the Herman family of Ancaster. Inge soon met and married husband Eckhard. They moved to the USA and began to raise a family until Eckhard's premature passing. She found the strength to return permanently to Hamilton in 1979 where, as a single parent, she provided a stable and nurturing environment for her sons. Inge was a long-time member of Mission Baptist Church in Westdale. The family is very thankful for the continued prayers and support she received from the congregation over the years. We wish to express our deepest appreciation to the caring PSWs who made it possible for mom to live at home as long as she did, to the staff of Parkview Nursing Centre and for the selfless, tireless, kind and respectful care she received throughout her stay, but particularly during this difficult period, by the staff at Shalom Village. We will forever be grateful. Interment took place May 26th at White Chapel Memorial Gardens. In lieu of flowers, please consider a donation to the Shalom Village Foundation: https://www.shalomvillage.ca/giving

With sadness we announce the passing of Ingeburg Gertrud Scheffler (n?e Eichelbaum) in her 85th year, with her sons at her side, at Shalom Village. We are comforted our mother has found the peace she sought for a very long time. Survived... View Obituary & Service Information

The family of Ingeburg Gertrud Scheffler created this Life Tributes page to make it easy to share your memories.

With sadness we announce the passing of Ingeburg Gertrud Scheffler...