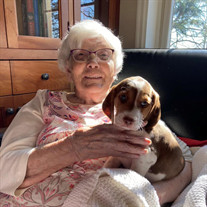 When I am dead, my dearest, Sing no sad songs for me; Plant thou no roses at my head, Nor shady cypress tree: Be the green grass above me With showers and dewdrops wet; And if thou wilt, remember, And if thou wilt, forget. I shall not see the shadows, I shall not feel the rain; I shall not hear the nightingale Sing on, as if in pain: And dreaming through the twilight That doth not rise nor set, Haply I may remember, And haply may forget. By Christina Rossetti Suddenly, in St. Catharines, Ontario on August 26, 2021, Irene May deLieveseley (nee Scott), of Lynden, Ontario, at age 90. Born in Hamilton to Edith and George Scott, Irene emigrated to England with her parents and her brothers, Jack and Frank Enfield. The family returned to Hamilton before war broke out in Europe; one of her fondest memories of these years was going to see The Wizard of Oz in a cinema with her brother Frank. Educated in Hamilton; after graduation Irene started work at Cook’s, where she met her future husband Ian delieveseley, whom she married in April of 1952. Irene continued to work after her marriage, and in 1963 the couple welcomed a daughter, and three years later a son. As a young married woman and a new mother, Irene completed a B.A. degree from McMaster University, and shortly thereafter enrolled in teacher’s college in Hamilton. Her first teaching job was in Binbrook; she moved around Hamilton-Wentworth County as it was then called, teaching in Mount Hope, Stoney Creek, and Sheffield. Along the way she became accredited in special education, guidance, and administration. Upon her retirement she was the Vice-Principal of two small schools in the countryside and was honoured with the award for best teacher in the county. Predeceased by her husband Ian (1930-2020), Irene will be sadly missed by her children Graeme (Carol Gideon), and Alison Farrell, and her grandchildren: Diana (Dana), James (Emily), Aislinn, Stephen, and William. Irene and Ian spent most of their working lives in Hamilton, and then purchased a small farm outside of Lynden, Ontario in 1986, where the family raised horses, chickens, cats, and hay, and which they added to the beauty of with home renovations, tree planting, and the creation of lovely garden plots. After her retirement Irene indulged her love of travel and voyaged to the locations of her dreams: China and India, and many other countries. She was extremely skilled with any sort of needlecraft and smocked, embroidered, quilted, and serged clothing and decorative objects in between gardening, decorating, reading, and doting on her grandchildren. Irene was a member of Holy Trinity Anglican Church in St. George, where she attended services and was involved in the Women’s Guild and on church committees. Irene was nearly blind when she died; the family would appreciate donations to the Canadian National Institute for the Blind in lieu of flowers. https://cnib.donorportal.ca/Donation/Donation.aspx?F=1841&T=GENER&L=en-CA&G=345&NFP=1

When I am dead, my dearest, Sing no sad songs for me; Plant thou no roses at my head, Nor shady cypress tree: Be the green grass above me With showers and dewdrops wet; And if thou wilt, remember, And if thou wilt, forget. I shall not see the... View Obituary & Service Information

The family of Irene May deLieveseley (nee Scott) created this Life Tributes page to make it easy to share your memories.

When I am dead, my dearest,
Sing no sad songs for me;
Plant thou...