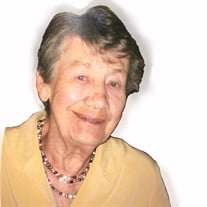 Taken from us on February 8th, 2018, at St. Joseph's Villa, Dundas, Ontario in her 85th year, Irene Rosamund (Hall) Staton was born on December 17th, 1933, in Bolton, Lancashire, England. The oldest of four children to Peter and Hannah Hall, Irene will be remembered with love by her sister Trudy Brunsden (Allan), brother Peter (Maureen) and her youngest sister, Carole Cheeseman (David). Irene married Kenneth on Easter Weekend, April 3rd, 1954, and celebrated 50 years of marriage before Ken's passing in 2005. Their only daughter Carole Lawer (Wayne) joined them in 1965, and Ken and Irene would follow her to Canada, with their beloved granddaughter, Imogen, in 2002, immediately falling in love with hot summers and learning to hibernate in the winters. During her working years, Irene started in a Lancashire cotton mill at age 15 to help support her family, served school dinners when Carole was young and eventually worked as a sweet-factory supervisor. She worked hard all of her life, but took pleasure in small things - the flowers in her garden, a Sunday trip to the seaside, or a game of Canasta on a Saturday night. Irene was an avid reader, with an interest in almost every subject, especially Egyptology and the weather. She loved to talk to people and was at home in any group. Never short of an opinion, which could be a challenge to change, she was a straight-shooter - Irene would tell it like it is, whilst always respecting your right to be wrong. She loved animals, the Rolling Stones, and Jeopardy, but most of all, was proud of her granddaughter. A celebration of life will be held at the Circle of Life, Dundas, ON, on Friday, 16th February, with a gathering starting at 11am, followed by a brief service and lunch until 2pm. In lieu of flowers, donations may be made to the OSPCA or St Joseph's Villa Foundation, in Dundas, Ontario. http://ontariospca.ca/ https://www.sjv.on.ca/foundation/

Taken from us on February 8th, 2018, at St. Joseph's Villa, Dundas, Ontario in her 85th year, Irene Rosamund (Hall) Staton was born on December 17th, 1933, in Bolton, Lancashire, England. The oldest of four children to Peter and Hannah Hall,... View Obituary & Service Information

The family of Irene Rosamund Staton created this Life Tributes page to make it easy to share your memories.

Send flowers to the Staton family.