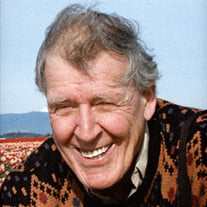 John died at home, surrounded by his family, on the 5th of November. He is survived by his loving wife Marnie and was the cherished father of Isis (Wendy), Jeanette (Louis), Pamela (Phil) and John (Lesa). He cared deeply for, and was very interested in his grandchildren and their accomplishments - Morgaine, Genoa (Dan), Ferghus, Jessica, Thea, Rachael and Johannes. Clara (who called him 'the giant'), Susanna and Riley all enjoyed playing with their great-grandad. Jan Willem (John) is dearly missed by his younger brother Dolf (Nora), as well as his brother-in-law Alec (Judi), and his favorite nieces and nephews Caina, Monica, Dolf and Chris. John always greatly enjoyed being with his family and friends and there are many people who will miss him. He was a very tall man, and an excellent teller of tall tales and stories. He lived life at 110% and had a wealth of experience from which to draw. John came to the US and then Canada from the Netherlands/Curacao after the Second World War. He loved jazz and saw many of the greats while studying and living in the eastern USA before going to Canada to survey for the Labrador railroad. He met his wife of almost 60 years when he was attending the University of Toronto in the 1950's. He subsequently studied at the Massachusetts Institute of Technology where he worked on some of the first mainframe computer applications for transportation planning. John completed his education and became a Professional Engineer employed in civil engineering and transportation planning for various governments and later his own companies. For the past 30 years he spent the warmer half of the year in Nelson BC, golfing and attending his daily coffee club with friends. He was a conductor on the Nelson tram and spent many happy days driving the antique tram and entertaining passengers with stories. And he was always up for a game of golf with friends and family. In his later years, John became increasingly concerned with the environment and wildlife, and on the type of world that his grandchildren and great grandchildren would inherit. In lieu of flowers please consider a donation to the Canadian Wildlife Federation (www.cwf-fcf.org). A celebration of life will take place on Sunday May 27, 2018 at the Ancaster Old Town Hall from 1:00 to 5:00 pm.

John died at home, surrounded by his family, on the 5th of November. He is survived by his loving wife Marnie and was the cherished father of Isis (Wendy), Jeanette (Louis), Pamela (Phil) and John (Lesa). He cared deeply for, and was very interested... View Obituary & Service Information

The family of Jan (John) Willem van Loon created this Life Tributes page to make it easy to share your memories.

John died at home, surrounded by his family, on the 5th of November....