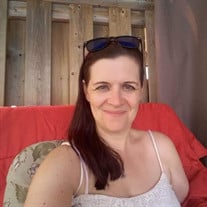 It is with heavy hearts, we announce the passing of Jane Patricia Cooper, after a valiant battle with cancer. Surrounded by loved ones on Monday, November 18th, 2019, Jane was at peace. Born September 26th, 1970 in Birmingham, England, Jane made the brave, solo move to Canada in late 2013. In 2014, she completed a General Business degree at Mohawk College, and began working as a Senior Event Services and Security Manager at CORE Entertainment. Jane was a courageous and compassionate person who always put others first, a kind and gentle person who loved spending time with family and friends, especially at CJs. Her indomitable spirit encouraged others to persist in the face of many struggles and showed everyone what a true fighter looked like. Jane always had a smile on her face and brightened the lives of others, she was an inspiration to all who knew her. Jane was predeceased by John Cooper. She is survived by parents Ann (the late Mark) and Peter (Helen), siblings Kate, Sally (Darren), Kerry (Sam), Emma (Ste), Oliver, James (Kim), Mark (Nat), Stuart (Laura), Clare (Richard) and Julie, all of England; her spouse Chris Thomas, and step daughter Mikayla. She will be deeply missed by her many family and friends, both in Canada and England, her CORE colleagues, and her Forest Run family. She will never be forgotten, her memory will be carried on by all those who had the pleasure of knowing her. So many people supported Jane throughout her journey, without your love and support her stay with us would not have been as long as it was. Thank you to the community at the Juravinski Centre, the 7th floor nursing and support staff at Joseph Brant, and to the fabulous workers at the Carpenter Hospice. Donations in memory of Jane are requested to be sent to the Juravinski Centre or Carpenter Hospice. Celebration of Life to be held on Friday, December 20th from 7-9pm at First Ontario Concert Hall, 1 Summers Lane, Hamilton.

It is with heavy hearts, we announce the passing of Jane Patricia Cooper, after a valiant battle with cancer. Surrounded by loved ones on Monday, November 18th, 2019, Jane was at peace. Born September 26th, 1970 in Birmingham, England, Jane... View Obituary & Service Information

The family of Jane Patricia Cooper created this Life Tributes page to make it easy to share your memories.

It is with heavy hearts, we announce the passing of Jane Patricia...

Send flowers to the Cooper family.