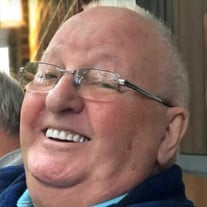 It is with tremendous sadness we announce the sudden passing of our beloved father, John Butterworth. Duke was a cherished father, grandfather, brother, uncle, mentor and friend to many. A beautiful soul with an amazing sense of humour and strong love for his family that spread far and wide across the globe. He had a zest for life, laughter and love that was inspirational. Born in Manchester, England to Ethel Birch and Stephen Compton Butterworth, John was a dedicated brother to his 12 siblings: William (Susan) (decd. 1991), Muriel (Ray) (decd. 2019), Stephen ( Patricia) (decd. 2011), Ted (Irma) (decd. 1991), Ben (decd. 1973), Frances (Dennis) (decd.2012), Betty (Eddie) (decd. 2020), Brian (Rita) (decd. 2005), David (Ann), Patricia (Trevor), Stan (Helen), and Katherine (Gerry) (decd. 2009). He had many happy memories growing up in such a large, loving family and remained very close to his brothers, sisters and their families until his passing. He had a special bond and was grateful for the love and friendship of his dear brother-in-law Gerry, who joined him in many adventures including an African Safari and portaging in Algonquin Park. Uncle Gerry was an integral part of John’s care and for that, we are forever thankful. John immigrated to Canada with his young bride, Margaret, and newborn daughter Terry in 1960. They settled in Dundas, Ontario where they remained for most of their lives. John had a lengthy career in business, with a strong interest and skills in technology at Westinghouse Canada. He was a huge part of the Dundas community through his involvement as a coach in hockey, lacrosse, baseball and ball hockey. He formed many life long friendships and was a mentor and friend to all. Never one to shy away from adventure, one of John’s finest experiences was at the age of sixty when he borrowed an old Volkswagen mini-van and travelled solo across Canada to Alaska. He went Into the Wild before it was popular. He loved the journey, places and people he met along the way. Predeceased by his wife Margaret, Poppa Duke will be sadly missed by his children Terry, Andy, Susie (Matt) and Laura, as well as his grandchildren Jessica (Michelle), Emily (Allan), Daniel, Calum, Finn and Kieran Duke, all of whom he was fiercely proud and close to. He instilled excellence in his grandchildren by guaranteeing twenty dollars for every “A” achieved, and every goal scored. Gatherings at the family cottage had so many wonderful memories with Poppa reciting “Albert and the Lion” around the campfire, along with jamborees with friends and family that left us all wishing for more. Saying goodbye to The Duke, Poppa, Mr. B, B’ster will be so hard for all of us. There are countless cousins, friends and family who will miss him. You were all very special to him. Please continue his legacy by living life to the fullest and honour his last words “Take care of each other”. Sleep well Mr. Wonderful, until we meet again xo Many thanks to the exceptional caregivers at Juravinski Hospital. A Celebration of Life will be scheduled and announced at later date. In lieu of flowers, a donation to a charity of your choice is welcome. Or if you wish to contribute to a memorial bench in John’s honour, please contact the family.

It is with tremendous sadness we announce the sudden passing of our beloved father, John Butterworth. Duke was a cherished father, grandfather, brother, uncle, mentor and friend to many. A beautiful soul with an amazing sense of humour and strong... View Obituary & Service Information

The family of John Butterworth created this Life Tributes page to make it easy to share your memories.

It is with tremendous sadness we announce the sudden passing...