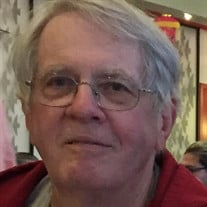 It is with great sadness that the family of John Roberts say goodbye to a devoted husband, father, grandfather, brother and friend. John died Wednesday, December 12, 2018 at St. Peter’s Hospital in Hamilton, Ontario. John leaves wife Linda Cox, daughters Lynette Scott (Dave), Leanne Cummings (Dan) and Lisa King (Jay Henry), stepsons Matt Parsons (Leslie), Luke Parsons (Sarah) and Dan Cox (Dara), grandchilden Jackie, Katie, J.R., Chayton, Tehya, Riley, Quinn and Ella, sisters Beth Spence (Todd) and Wilma Caron (Virgil Wilson) and brother Owen Roberts (Angi). He also leaves many nieces and nephews who knew and loved Uncle John. As well, he leaves his beloved dogs Ben, Robbie and Cooper. John was born in Chatham on May 31, 1944, the eldest son of the late Art Roberts and Evelyn Roberts (nee Cadotte). He attended a one-room schoolhouse near Mitchell’s Bay for his primary education, and he went on to graduate from Wallaceburg District High School, the University of Windsor and what was then the University of Western Ontario. In the workforce, writing and learning remained a constant in John’s life. Early in his career, he worked at Random House, one of Canada’s largest book publishers, editing manuscripts and working with some of the country’s most prolific writers. He would go on to publish more than 40 books, including co-authoring a best-selling book on the Toronto Maple Leafs. Ultimately, John resumed his graduate studies part-time and earned a Ph.D. He enjoyed a long and illustrious career as a tenured professor of language studies at Mohawk College in Hamilton. After retirement, he entered a new career as a supply teacher for Hamilton-Wentworth District School Board. In education, his passion was for improving education for Indigenous students. This was driven in part by his own Indigenous heritage as an Anishnabe Metis. He developed curriculum that taught children from an Indigenous perspective, and advocated for better funding for on-reserve schools. Many of his text books helped shape how high school students understood Canada’s Indigenous peoples. As an Indigenous leader, John founded the Canadian Metis Council and served as the director of education for the Ontario Coalition of Indigenous Peoples. He was an outspoken advocate for Indigenous rights and through the media drew attention to the plight of urban aboriginal and Metis populations. He used his expertise in Canadian aboriginal culture to improve training for police services, publishing textbooks for basic recruits and officers that would provide a better understanding around Indigenous culture. John also served on the Hamilton Chief of Police’s Committee for Minority Relations and was a former auxilary member of the Niagara Regional police. Wanting to know more about his own Metis heritage, John researched and wrote the thorough Roberts/Cadotte family history stretching back into the 1600s. He also wrote articles for the Ontario Genealogical Society, showing people how to research their Metis ancestry. John was a huge animal lover and made many friends walking his dogs in his Queen St. E. neighbourhood. A mass for John will be held Friday, December 21 at St. Joseph’s Parish Church, 260 Herkimer St., Hamilton. Visitation will take place from 10 a.m.-11 a.m., followed by mass at 11 a.m. and lunch and celebration of life from noon – 2 p.m. In lieu of flowers, donations may be made to the Native Women’s Centre, www.nativewomenscentre.com www.nativewomenscentre.com

The family of Dr. John Alexander Roberts created this Life Tributes page to make it easy to share your memories.

It is with great sadness that the family of John Roberts say...

Send flowers to the Roberts family.