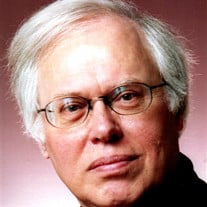 Jules Pierre Jean Carbotte died April 5 at age 81 of complications of cancer. Jules was born in Long Beach California, March 26, 1938 while his parents, Leon and Pauline Carbotte were on an extended winter vacation from their home in Frye, Saskatchewan. Jules was raised in the French Canadian community in Manitoba and had a classical secondary education from the Jesuits at College St Boniface. He met his wife Ramona, a bright and beautiful young woman from the farming community of Treherne Manitoba, in a first year summer school class in physics while they were both beginning their undergraduate degrees at the University of Manitoba. They married in 1959 and shared 59 years together. Jules went on to complete a MSc and PhD in Theoretical Physics at McGill University, graduating in 1964 at the age of 26. He joined the McMaster University faculty in 1965, took a position at McGill University from 1967-1968, returning to McMaster in 1968 where he stayed for the rest of his career. He was named a Fellow of the Royal Society of Canada and awarded the CAP Herzberg Medal for Achievement in Physics in 1974, and the Steacie Prize in 1975. In 1996 he was named University Professor at McMaster and was later awarded four Honorary Degrees, from Waterloo University, the University of Manitoba, Sherbrook University and McMaster University. Over his 55 year career, Jules worked broadly in the field of condensed matter physics with his most recent work in high-temperature superconductivity, graphene, and topological materials. Jules was a wonderfully gregarious and generous man, infinitely curious and with a deep passion for the mysteries of our world as revealed through science. Jules is survived by his wife Ramona (née DePauw), daughters Sr. Christine CSJ and Suzanne, son-in law Bob Blaisdell, grand-children Max and Odette, his siblings Dom Marcel OCSO, Paul (Adeline), and Anne-Marie (Bernie). He is pre-deceased by his brother Roger (Florence). As per Jules’ wishes there will no funeral service. His remains have been cremated and memorials will happen at a later date. In lieu of flowers, donations can be made in Jules’ name to the Juravinski Cancer Centre https://hamiltonhealth.ca/

Jules Pierre Jean Carbotte died April 5 at age 81 of complications of cancer. Jules was born in Long Beach California, March 26, 1938 while his parents, Leon and Pauline Carbotte were on an extended winter vacation from their home in Frye, Saskatchewan.... View Obituary & Service Information

The family of Dr. Jules Pierre Jean Carbotte created this Life Tributes page to make it easy to share your memories.

Send flowers to the Carbotte family.