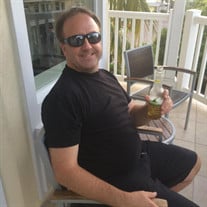 On Friday, September 24, 2021, Justin passed away peacefully surrounded by his loving wife Sylvia, daughter Rheanna, and son Jett. Over 3 years ago, after suffering a broken leg, Justin was diagnosed with kidney cancer that had spread to his bones. He underwent many surgeries, radiation, chemotherapy and countless medical appointments which gave him the time he needed to celebrate his 20th wedding anniversary, his 50th birthday, to go to Italy, to see Jett begin high school and attend Rheanna’s graduation from high school and start her first year of university. Justin was born on October 8, 1969, in Regina, Saskatchewan to Bert and Gail Bowler. He was the beloved husband of Sylvia and very proud father of Rheanna and Jett. He is cherished by his brother Jeremy (Sylvie), several nephews, nieces, aunts and uncles in both Ontario and Saskatchewan. Justin was a proud prairie boy and Rough Rider fan, who went to the University of Toronto to pursue Engineering Science (Aerospace). While at U of T, Justin met Sylvia. This marked the beginning of their 30-year romance. After graduation, Justin had a variety of information technology jobs which took him to the Caribbean and the United States, and most recently, a Chief Technology Officer role. Justin loved to cook, build things, drive his ’64 Mustang convertible, and enjoyed fine Scotch and cigars. He also enjoyed coaching both kids’ recreational soccer teams and handing out pizza at their schools. Justin was cared for by amazing medical professionals who respected his needs and enjoyed his sense of humour. He is the only person known who had the cell number of every doctor he saw. His family sends a huge thank you to Dr. Bjarnason, Dr. Soliman and the staff at Sunnybrook, and to Dr. Ginty and Dr. Gupta at Trillium Health Partners. Much appreciation goes out to friends and colleagues who heard he was admitted and went to check up on him and bring him goodies. Justin’s family is truly grateful. It had been a long 3+ year journey. A Celebration of Life will be held at 2 p.m. on Saturday, Oct 9th, Chez Bowler. In lieu of flowers, please have a glass of Scotch or send a donation to Tourette’s society or the SPCA. https://www.hbspca.com/ https://tourette.ca/donation/

On Friday, September 24, 2021, Justin passed away peacefully surrounded by his loving wife Sylvia, daughter Rheanna, and son Jett. Over 3 years ago, after suffering a broken leg, Justin was diagnosed with kidney cancer that had spread to his... View Obituary & Service Information

The family of Justin Chad Bowler created this Life Tributes page to make it easy to share your memories.

Send flowers to the Bowler family.