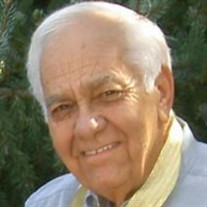 With deep sadness we announce the passing of Len Saltmarsh at home in Dundas, Ontario on March 22, 2020, just shy of his 95th birthday. Beloved husband of Dorothy, loving father of Mark (Linda) and Karen (Keith), and cherished grandfather of Miles (Stephanie), Kara (Tyler) and Brooke (David). Len often reflected that he was a lucky man and he was happiest when out and about engaging with people. Dorothy learned early on to expect that every outing would take extra time as Len invariably met someone to chat with. Len’s life was defined by a strong commitment to public service and to home and family. After serving in World War II with the RCAF, Len returned to Hamilton and began a 43 year career with the Hamilton Fire Department. Fire Chief for 17 years, Len was a leader in fire services both locally and nationally. He fought to ensure his firefighters had the best equipment and training and also worked to get legislation for mandatory smoke detectors and sprinklers. Not one to settle into a quiet retirement, Len was active with the Hamilton Downtown Rotary Club. He loved to share stories of his volunteer work in the Keith Neighbourhood, in particular at Robert Land School, and was very touched many years later when a former student introduced him to her grandmother as “the man who taught me to read”. A lifelong voracious reader, he knew the importance of literacy, helping to establish The Telling Tales Festival in 2009. Even later, still wanting to engage, he loved spending time with McMaster gerontology students where he took great pride in dispelling some of the myths of aging! Len was a lifetime community leader who made a positive difference. Of course, none of this was possible without the lifelong support of Dorothy. Married for over 71 years, they were always together. One of Len’s favourite stories was about how he first spotted Dorothy through a second floor office window from the back of a firetruck. While a man of many accomplishments, he was most proud that he provided for his wife, his kids and his grandchildren. Even as the grandchildren got older, he was always keen to stay connected and hear about their busy lives. He was interested in politics, gardening, bird watching and was an avid fan of the Toronto Blue Jays and Raptors. In recent years, he was happiest in his Dundas home or puttering in the garden where he often chatted with neighbours and passersby. With Dorothy he enjoyed eating out at favourites like Bangkok Spoon, Koosh and Ola Bakery. Over the last year as life slowed down, he really missed his weekly visits to Weil’s Bakery and Second Cup in Westdale. The family is grateful for the recent care from personal support workers, nurses, therapists and Dr. Williams. Cremation has taken place and a celebration of life will be held at a later date.

With deep sadness we announce the passing of Len Saltmarsh at home in Dundas, Ontario on March 22, 2020, just shy of his 95th birthday. Beloved husband of Dorothy, loving father of Mark (Linda) and Karen (Keith), and cherished grandfather of... View Obituary & Service Information

The family of Leonard George Saltmarsh created this Life Tributes page to make it easy to share your memories.

With deep sadness we announce the passing of Len Saltmarsh at...

Send flowers to the Saltmarsh family.