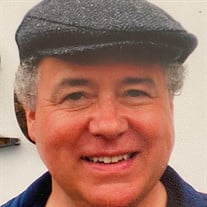 The world has become a sadder place for those of us who had the privilege and joy of knowing Mike Sheehy. He died suddenly on Thursday, April 8th of non-COVID-19 related issues. Mike was many things - loyal, witty, sarcastic. He was the smartest guy in the room and just about the best friend you could ever have. Although he had a very challenging start to life, he rose above it and became the first person in his family to graduate from university, with a Bachelor of Mechanical Engineering. Later, he attained a second degree at McMaster University - an MBA in Finance. His sharp, analytical mind and natural leadership skills eventually led to a successful career as the General Manager of several large manufacturing plants including Eaton Yale Ltd., Tinnerman and Orlick Industries Ltd. He loved growing up in Greensville - he always said he couldn’t have asked for a better place to spend his childhood. Mike loved Hamilton, the Dundas Peak, Webster’s Falls park, his friends (many of whom he had known since grade school), Johnny Quest, Star Trek (the original series!) Burt Bacharach, cringeworthy, old movies (preferably black and white) and gazing up into a star-filled sky. There was nothing he couldn’t build or fix, nor a problem he couldn’t solve. He leaves behind his two devoted children, Stephanie and Jason, who are grateful to their Dad for the wonderful childhood he provided to them, and the love and support he gave throughout the years. He also leaves behind loved ones Pauline, Caitlin and Ron, and his sister Janice, who is devastated by the loss, as he was her longest and most loyal friend, who served as a role model, sounding board and constant source of brotherly wisdom and advice. He had a large circle of friends who will miss him dearly. In view of current COVID-19 restrictions, the family will have a private service, with hopes of hosting a larger celebration of his life when it is safe to do so. Donations can be made to The Salvation Army of Canada, an organization that provided support to Mike and his family when he was young and for which he was eternally grateful. https://salvationarmy.ca/donations/

The world has become a sadder place for those of us who had the privilege and joy of knowing Mike Sheehy. He died suddenly on Thursday, April 8th of non-COVID-19 related issues. Mike was many things - loyal, witty, sarcastic. He was the smartest... View Obituary & Service Information

The family of Michael Steven Sheehy created this Life Tributes page to make it easy to share your memories.

The world has become a sadder place for those of us who had the...