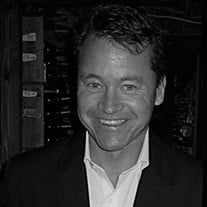 At peace after a long and pitched battle with brain cancer, Michael will be sorely missed by his adoring wife of 23 years, Katherine (née Gingrich) and his beloved daughters, Rachel and Avery. Predeceased by his cherished father, John Brunton Webber, Michael is survived by his loving mother Janet Webber; he will also be greatly missed by his sister Wendy Jackman, her husband Dan, and their children Mallory and Walton. Michael’s father-in-law, Tom Gingrich, sisters-in-law, Ruth Ann and Claire Gingrich, and brother-in-law, Kirk Brennand will forever miss his humour, humility and commitment to family. Finally, Michael leaves behind a host of nieces, nephews, cousins, aunts and uncles who will treasure his memory. From St. Andrew’s College to Queen’s to Western, where he graduated with a law degree in 1993, Michael made a difference in the lives of all those around him, inspiring admiration, loyalty and lifelong friendships. After leaving Blakes, Cassels and Graydon, Michael became an in house lawyer for Rogers Communications in 2001. It did not take him long to become Vice President Legal for Media and content businesses, and in this role he won the Canadian General Counsel’s Dealmaking Award of the Year in 2014 for his work on the Maple Leaf Sports and Entertainment deal. He loved his work at Rogers, and all those who worked with and for him, greatly admired his exceptional work ethic, impressive intellect, infectious humour and big heart. From the shores of Georgian Bay, where he was an enthusiastic boater to the slopes of Beaver Valley, where he was an avid skier, Michael embraced life. He worked hard, but his family was the centre of it all. This summer, some of Michael’s ashes will find their resting place at the family cottage on Deep Bay, and the rest will be spread on his favourite island out on Georgian Bay. He will find peace knowing that he will be with his family in spirit, in the places that brought them joy. The Webber family wishes to extend a heartfelt thank you to the team at Carpenter Hospice in Burlington, where the entire staff made Michael’s last days comfortable and pain free. It is a gift to know that when Michael finally decided to lay down the sword, that the wonderful staff at Carpenter Hospice made his final moments so peaceful. As such, in lieu of flowers, the family would greatly appreciate a donation to the Carpenter Hospice--their work makes an incredible difference. On Monday, March 4, there will be a memorial service at St. Christopher’s Anglican Church, 662 Guelph Line in Burlington at 2:30 pm, followed by a Celebration of Life at Spencer’s At The Waterfront, 1340 Lakeshore Road, Burlington from 4pm to 7pm. To donate to Carpenter Hospice, please click on the link below: https://www.canadahelps.org/en/dn/13666

At peace after a long and pitched battle with brain cancer, Michael will be sorely missed by his adoring wife of 23 years, Katherine (née Gingrich) and his beloved daughters, Rachel and Avery. Predeceased by his cherished father, John Brunton... View Obituary & Service Information

The family of Michael John Webber created this Life Tributes page to make it easy to share your memories.

At peace after a long and pitched battle with brain cancer, Michael...

Send flowers to the Webber family.