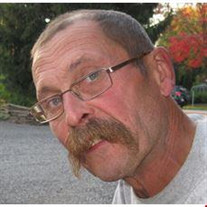 With his family by his side, we held him close and whispered in his ear, "Paul, it's time to go home. Don't worry about us, we are hurting, but we'll be ok. Let the Angels take you to your mother Faith (Lawson) and father Bill, who wait with open arms." Paul is survived by his loving wife Lisa, ex-wife Margaret (Bill), his children Sean (Kristen), Patrick, Nigel (Kalie), his step-children Kelita, Jessica, Jay (Chantale), his grandchildren Kaleb, James, Eric, and his cat Corporal as well as many friends and extended family. Paul lived his whole life in Hamilton and was a large fixture in the Westdale area. After graduating from Westdale Secondary School, he acquired his mechanic’s license and began his amazing career fixing cars, trucks, heavy equipment and just about anything that anybody asked him to. He worked at Ted's Service Centre in Aldershot, had a short stint at Stelco, then started his own shop, Performax Auto, on Beach Road in the east end. In 1994, he moved his shop to Frid Street where he stayed ‘till he closed in 2003. In 1984, Paul joined the reserve unit Royal Hamilton Light Infantry (RHLI) - Wentworth Regiment - at the John Weir Foote VC Armoury in Hamilton. In the 10 years he was with the military, he earned the rank of Sergeant and the utmost respect from everyone he served with. In 2008 he went overseas as a civilian Heavy Equipment Mechanic attached to Kandahar Air Field (KAF) Vehicle Maintenance with the Canadian Military under the Joint Task Force Afghanistan R-5. There he received the Commanders Coin for going above and beyond the call of duty, which says everything about who Paul was. Upon his return, he was fortunate to be hired by the Hamilton Conservation Authority as their mechanic at the Millgrove Yard in Flamborough. Paul lived life large and on his terms. He had a code of honour that taught us all about respect, loyalty, duty, honesty, hard work, friendship, love of family and all the things that make us better human beings for knowing him. Please join us in a Celebration of his Life on Saturday, October 22nd in the RHLI -Officers Mess of the John Weir Foote VC Armoury, 200 James St. North, Hamilton, ON L8R 2L1, from 12:00 pm - 4:00 pm. We'll raise a beer Paul's favourite thing, and toast a man who brought laughter, a joke for every occasion, and always a smile on his face to everyone he met! Special thanks to Dr. Heller, Dr. Woods and the many nurses at St. Joseph's Hospital who cared for him. In lieu of flowers, donations would be appreciated to the Hamilton Conservation Authority. Soldier on Hutch….you will be missed.

With his family by his side, we held him close and whispered in his ear, "Paul, it's time to go home. Don't worry about us, we are hurting, but we'll be ok. Let the Angels take you to your mother Faith (Lawson) and father Bill, who wait with... View Obituary & Service Information

The family of Paul "Hutch" William Hutchinson created this Life Tributes page to make it easy to share your memories.

With his family by his side, we held him close and whispered...

Send flowers to the Hutchinson family.