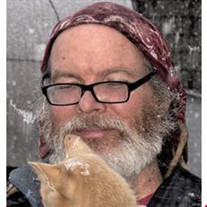 It is with great sadness that we announce the passing of Peter on Friday May 27th, 2016. Peter is survived by his wife Kathy, and their children Josi, Niki and Willow. Also survived by his mother Carol, his father Ralph, his sisters Kellee and Stacy, and brother Joey. His mother in-law Carol, and father in-law Hans. Peter will be sadly missed by his nephews Adam and Logan and his nieces Mika, Tabitha and Ciara. Whether it was Peter's growing so tall at such a young age, or the punk years of his teens, or the long beard and dreads of more recent years, Peter was always someone who stood out in a crowd. But his uniqueness was more than skin deep. He truly enjoyed the misfits, the outsiders, the underdogs and the independent thinkers in life. Known to his friends as "Combat Pete", it was a misleading nickname as he was quite the peaceful character. He loved a good political debate. He didn't care much if his beliefs were not popular, but he cared greatly about victims of discrimination. Peter loved to cook and was known to bake bread and pies to share with his friends, family and neighbours. His happiest moments were spent baking treats for his family, neighbours and friends, and watching them enjoy every bite. To him, love and food were one and the same. He got great enjoyment in growing his own pumpkins and would share his tricks in growing really big impressive ones. He enjoyed walking and biking in the woods and even in recent months he would write down many details about the animals and things he saw on those excursions. Peter loved music and was rarely seen without his headphones and music player. He also loved computers and could build you a great computer on the cheap. On the job, Peter was known as a joker, usually with a smile and a twinkle of mischief in his eyes. This served him well on the many unusual tasks he often performed on the family farm, whether he was dismantling farm equipment, doing late night egg gathering, or tending to a middle of the night emergency, Peter approached each job with good humour. Peter loved his wife and children. He loved and was loved by his family, his friends and his community and will be greatly missed by all. As per Peter's wishes, cremation has taken place. Family and friends are invited to a memorial gathering at Circle of Life Cremation and Burial Centre, 100 King St. East, Dundas, on Saturday June 18th from 1 p.m.-4 p.m., with a Celebratory Service being held at 2 p.m. In lieu of flowers a donation to Parkinson Canada would be greatly appreciated.

It is with great sadness that we announce the passing of Peter on Friday May 27th, 2016. Peter is survived by his wife Kathy, and their children Josi, Niki and Willow. Also survived by his mother Carol, his father Ralph, his sisters Kellee and... View Obituary & Service Information

The family of Peter Thomas Kaulback created this Life Tributes page to make it easy to share your memories.

It is with great sadness that we announce the passing of Peter...

Send flowers to the Kaulback family.