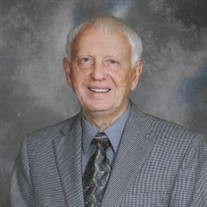 Robert “Bob” Lewis Peirce passed away peacefully, surrounded by family, at Hamilton General Hospital on November 20, 2018 at age 81. Gentle, genial, kindhearted and fun-loving, Bob was born in Woodstock, Ontario in 1937 to George Elliot Peirce and Mary Isabel Peirce (née Lewis). He later graduated from the University of Western Ontario with a degree in Business Administration. He met lively and lovely young nurse Beverley Ivy Ricketts in Woodstock, and they were married in 1961. Bob’s job with the Ralston Purina Company took their growing family to numerous locations in Canada and the US before the Five Bs—Bob, Bev, Brian, Brad and Brent—finally settled in Willowdale, Ontario. After 20 years with Purina, Bob’s entrepreneurial spirit took over and he purchased Kirkpatrick’s Leather and Sporting Goods. Bob was predeceased by Bev after 39 loving years of marriage with her sudden passing in 2000. Throughout his life, Bob was an active member of the United Church and found joy in music, entertaining, and recreational sports, including curling, golf, baseball and cross-country skiing. Left to treasure his memory with love and great admiration are his children and their spouses, Brian and Lynne of Dundas, Brad and Heidi of Hamilton, and Brent and Jessica of Toronto; and his granddaughters, Mallory, Meghan, Delaney, Mackenzie, Sarah and Erin. Bob will be greatly missed by his brother, George Edward Charles Peirce; his sister-in-law, Ruth Elizabeth Kathryn Ricketts (née Dunn); his dear friend Rita Van Landeghem; and his cousins and many friends. The family would like to express their thanks to the wonderful staff at the Village of Wentworth Heights and the staff of the Neuroscience floor at Hamilton General. There will be a Celebration of Life in Bob’s honour at the Village of Wentworth Heights, 1620 Upper Wentworth Street, Hamilton, Ontario on Saturday, December 29, 2018 from 2–4 p.m. Bob will be interred next to Bev at Highland Memory Gardens in North York at a later date. In lieu of flowers, the family would appreciate donations to the Alzheimer Society of Canada, the Heart and Stroke Foundation of Canada, or the United Church of Canada. http://alzheimer.ca/en/Home https://www.heartandstroke.ca/ https://www.united-church.ca/

The family of Robert "Bob" Lewis Peirce created this Life Tributes page to make it easy to share your memories.