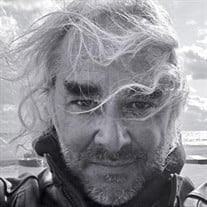 Bob suddenly passed away on Monday, April 19, 2021, two weeks after his 73rd birthday. Bob leaves his brother Daniel and sister Jocelyne, life companion Margot, and his many friends in the Hamilton music and arts community. He is following his brother Ronald, who died in 2003, his father Guay in 2010, and his beloved mother Gilberte (Jill) who passed away seven months ago in October 2020. Bob grew up in a large French Canadian family in Gatineau, Quebec, and in 1960 moved to Hamilton, Ontario, with his mother, two brothers and sister. The family moved to nearby Ancaster soon after. In his late teens, he ran a recording studio in the basement of his mother's home in Ancaster, and in 1976 built and operated Grant Avenue Studio in Hamilton, both together with his brother Daniel. He continued designing and operating recording studios throughout his life, including the Shack (a cabin he built himself in the woods near Waterdown), the Lab, and most recently The Bunker and the Mule Spinner at the Cotton Factory in Hamilton, Ontario. He invented and built recording equipment like the infamous Bobometer and the BL99 preamp. Bob was a talented musician, songwriter, record producer, sound expert, filmmaker and photographer, visual artist and uncompromising creator. His mind was exceptionally innovative and curious, always working on new ideas and breaking established molds, forever creating, building or augmenting something. His talent for lighting would turn a room into a magical place. He rode his Harley Davidson across the US, to Canada's East Coast, and in the summer to Port Dover and Long Point beaches, often with a great place to swim as the destination. He was happiest in wilderness, nature and near water. Bob loved Hamilton and the many backroads and trails that he was constantly exploring. A severe motorcycle accident in 2011 forced him to slow down but couldn't stop him. Bob believed that his greatest achievement was to see his mother nearly every single day of his life. A strong and wild man, inspired inventor of 10,000 tools and ideas, sonic pioneer, lover of mirror balls. Rest in peace, Bob, you will be missed by many. Cremation has taken place and the family plans a memorial gathering at a future date. No flowers or cards please. If you wish to do so, a donation in Bob's name to a charity of your choice is something he would have appreciated.

Bob suddenly passed away on Monday, April 19, 2021, two weeks after his 73rd birthday. Bob leaves his brother Daniel and sister Jocelyne, life companion Margot, and his many friends in the Hamilton music and arts community. He is following his... View Obituary & Service Information

The family of Robert Jacques (Bob) Lanois created this Life Tributes page to make it easy to share your memories.