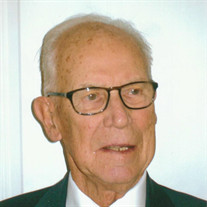 Passed away peacefully in his 97th year, after a life well lived. Predeceased by cherished wives Janet (1978) and Wilma (2013). Beloved father of Fran Elliot (Kevin), John Shimmell (Lorie) and Brenda Hutton (Paul). Step-father to Jim, Jennifer, Mike and Mary. Cherished Grandpa of Ryan, Sarah, Whitney, Scott, Alex, Emily, Mike, Johnny, Jacqueline, Heather, Stuart, Allison, William, Hayley, Jesse and Sam. Great-Grandfather to Owen, Jacob, Calvin and Matthew. Caring brother to Kathleen Kernaghan of Calgary. A proud veteran of WWII, Bob spent 4 and a half years with the Canadian Armed Forces. He served with distinction as a Sergeant with the RAF/RCAF as a Radar Mechanic in Great Britain and Gibraltar. After the war he returned to Hamilton and was a loyal employee of Proctor & Gamble for 46 years. Longtime resident of Dundas and Ancaster, Bob was active into his 90s as an avid golfer and curler. Bob amassed many longtime friends during his life and we are grateful for their friendship and support. A Celebration of Life will take place on Sunday, March 12th from 2-4 p.m. at Circle of Life, 100 King St East, Dundas (additional parking at The Air Force Club). Family remembrances at 3 p.m. As an expression of sympathy, donations to the Canadian Cancer Society or a charity of your choice would be appreciated.

The family of Robert Oswald Shimmell created this Life Tributes page to make it easy to share your memories.

Passed away peacefully in his 97th year, after a life well lived....

Send flowers to the Shimmell family.