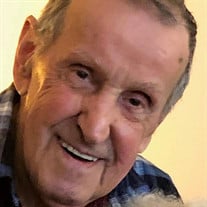 Roy was born in 1932, the same year that Louis Armstrong sang “All of Me”, and Cole Porter released “Night and Day”. It was the year that “Brother Can You Spare a "Dime” became a hit, emblematic of the dark days of the Great Depression. Roy was born in Toronto and raised in Hamilton by parents Robert and Lillian. His siblings were Joe (deceased) and Marie (deceased). He entered into military service, going overseas after WW2 with the Royal Canadian Dragoons. Returning to Hamilton, he was invited out on a blind double date with a feisty young beauty named Jean Elsie Ellis. Jean returned home that evening and said, “I’m going to marry him,” which she did, on August 29, 1959. Roy and Jean started their family on Grenallen Drive in Burlington and moved to Rothsay Avenue, the big house by the park with their children Robert and Christine (Hopkins) and then baby Patrick (deceased). He became an operator with the HSR and drove buses through Hamilton for 34 years. Holidays were camping trips to Six Mile Lake, Arrowhead, Quetico and Algonquin Parks, usually in the rain. The family remembers happy times together with Marie Kirk and Jennifer Hines, Doris and Tom Goodwin, Bob and Lynn Ellis, Harriett and Bob Moody, Eva and Harry Elburg and their families. Retiring in 2001, Roy and Jean started a new life in Southampton, Ontario where they enjoyed 17 years by Lake Huron, making many wonderful friends and were actively involved with the Southampton Legion #155. Roy marched with the colour guard at Remembrance Day parades and was good friends with the late Art Hawes, his coffee buddy. Bob and Rose Goodwin shared many happy times with them in Southampton dotting about the countryside. Roy and Jean were blessed with grandchildren, Lucy (Tyler Osborne) and Jeremy Hopkins and Caitlyn Kirk, and Roy was surrounded by their love when he passed peacefully at St. Joseph’s Villa in Dundas on June 16 2021. Roy was a soft-spoken, kind and gentle man who loved his wife, his children and his grandchildren. He was not a big personality and life of the party kind of man. He was the kind of man who was happy to drive us to the party and make sure we got home safely. His 67-year love story with Jean is one for the books, and his grateful children and grandchildren are his legacy. Many thanks to the staff at the Chartwell Georgian retirement home in Dundas where he lived with Jean and at St. Joseph’s Villa where he spent his final weeks. In keeping with his wishes, cremation has taken place and there will be no service. In lieu of flowers, please consider donating to your local Legion.

The family of Roy John Kirk created this Life Tributes page to make it easy to share your memories.

Roy was born in 1932, the same year that Louis Armstrong sang...

Send flowers to the Kirk family.