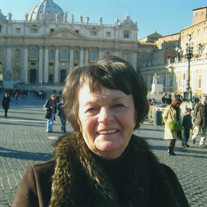 In loving memory of Ruby Gadawski of Ancaster, who passed away peacefully at the age of 86, on August 18, 2021, with family by her side. Ruby will be remembered lovingly by her husband Henry (Hank). Ruby and Hank were married on September 7, 1957 and were blessed with 64 years of marriage. Ruby was predeceased in 2005 by eldest son Richard (Rick) Gadawski of Brantford, husband to Joanne. Ruby is also survived by daughter Jayne and son Rodney, both of Ancaster. Ruby is also survived by brother David Finch, and by her granddaughters Jodi, Sarah, Katie, Megan and Holly. She will be lovingly remembered by extended family and many friends. Ruby was born Ruby Ruth Finch, to the well-known family who created Finch & Sons Transport Limited of Brantford. She took that entrepreneurial spirit to heart, and launched Jewels by Ruby – beginning as a home-based costume jewellery business and later a prominent jewellery retailer in downtown Dundas, operated with her husband, Hank. Ruby and Hank raised their family at their country home in Alberton, and enjoyed summers at their Lake Erie cottage in Turkey Point. Ruby had a keen eye for yard sale treasures, and was often out on a weekend adventure through the countryside with her long-time friend Val. In 2020, Ruby and Hank moved to Highgate Residence in Ancaster, where many dear friends will smile as they remember Ruby’s wit and her love of the piano. Ruby also enjoyed classic films from the golden age of Hollywood, such as “South Pacific” and “My Fair Lady”. Her travels took her to places such as Hawaii, New Orleans, Rome and Vatican City. Ruby’s family extends heartfelt thanks and appreciation to those who were so important to her and who helped her along her journey. Ruby will forever be in our hearts. Cremation has taken place, and a private family gathering will be scheduled. After a day of cloud and wind and rain Sometimes the setting sun breaks out again, And touching all the darksome woods with light, Smiles on the fields until they laugh and sing, Then like a ruby from the horizon's ring, Drops down into the night. ~ Henry Wadsworth Longfellow

In loving memory of Ruby Gadawski of Ancaster, who passed away peacefully at the age of 86, on August 18, 2021, with family by her side. Ruby will be remembered lovingly by her husband Henry (Hank). Ruby and Hank were married on September 7,... View Obituary & Service Information

The family of Ruby Ruth Gadawski (nee Finch) created this Life Tributes page to make it easy to share your memories.

In loving memory of Ruby Gadawski of Ancaster, who passed away...