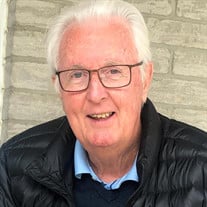 It is with great sadness we announce the passing of Stanley Dodds Gorrie on Wednesday December 16, 2020. Stan was born on July 31st, 1944, in Edinburgh, Scotland. He was the youngest son of the late James and Janet Gorrie and younger brother to James. Stan was happy to be married to the love of his life, Brenda, who he recently celebrated his 55th wedding anniversary with. Stan and Brenda moved to Canada with their two young children, Karen and Heather in 1974 in hopes of a better life and lived most of his life in Burlington and Stoney Creek after immigrating from Scotland. His children Karen and Heather were very lucky to have Stan as their dad and would often laugh at his stories and bits of advice. Always one to tell jokes and stories, he had random facts about topics others had little information about and his daughters would often find his names for objects and knowledge of sports trivia funny. He spent many hours with his girls and was very proud of them and the career paths they chose. Stan had a soft spot for his girls and was always willing to go on little trips together to the cottage or go for drives to Niagara on the Lake or go for lunch and picnics. He was a huge Maple Leafs and Raptors fan and loved to play golf and watch sports. He also loved Rock n Roll and enjoyed playing his music loud and dancing with his kids and even had some of his favourite records framed along the walls of his basement. He was the proud grandfather of Charlie (Stephanie), Mark (Marissa), Rajeev, Vanessa, Sabrina, Amanda, Sarah & great grandchildren Ava and angel baby Isaiah. Stan spent many hours in hockey rinks, at dance recitals, gymnastics competitions and horse shows cheering his grandchildren on. He was not just a father-in-law to Sunil Jetly (Karen) and Chuck Mulé (Heather) but a cherished friend also and enjoyed rounds of golf, watching the hockey, the soccer and basketball together while sharing a beer and a scotch. Son-in-law to the late George and Ethel Stevenson, Stan’s thoughts were never far from his family in Scotland and many summers were spent exploring Canada together and visits back to Scotland. Stan was brother-in-law to Jacqueline (James) Gorrie and uncle to their children, Linda, Pamela and Louisa. Stan was also brother-in-law to Jimmy and Heather Price and uncle to their children Jane and Kenneth. Stan was also a Great Uncle to Sophia, Lewis, Lauren & Abbie. “Uncle Stan” also to Roslyn (Peter), David (Julie), Phillip (Jodie) and nephew-in-law to Joyce and Lawrence Anderson many holidays, celebrations, dances and pool parties were spent together over the years. Stan was well known as a tall, handsome, well dressed man, and had a large clientele that would come to him for the perfect suit to wear for their special occasions. He worked as a Store Manager and salesman for many years at Tip Top Tailors and Moore’s for Men and had loyal customers that would only go in to see Stan for their clothing. He also worked at Maple Leaf Foods for several years as a butcher but preferred sales and returned to it again and stayed well past retirement, because he loved it so much. Always a family man he was never far from family in his spare time and the friends he made after moving to Canada became his extended family. Susan and Ivan Jefferies and their children became life long friends and family to Stan after meeting them within weeks of moving to Canada and maintained their friendship throughout the years. He welcomed anyone close to his wife or daughters in to the family too and had a special place in his heart for his children’s friends and extended families. A healthy and active man, it came as a huge shock to his family and friends when diagnosed with an extremely invasive form of pancreatic cancer only 6 weeks ago. The care and support provided by his much loved doctor, Dr. Ann Huang was very much appreciated by him and his family and the kindness and compassion shown towards him and his wife at Joseph Brant Hospital in his final days by his nurses Sarah, Heather, Petrina and Teresa was very much appreciated by the family. Due to Covid-19 restrictions, cremation has taken place. A small private gathering of immediate family has taken place. A Celebration of Life will be held in the future for family and friends as restrictions on social gatherings are lifted. In lieu of flowers, donations can be made in Stan’s name to the Canadian Cancer Society. https://www.cancer.ca/en/donate/?region=mb

It is with great sadness we announce the passing of Stanley Dodds Gorrie on Wednesday December 16, 2020. Stan was born on July 31st, 1944, in Edinburgh, Scotland. He was the youngest son of the late James and Janet Gorrie and younger brother... View Obituary & Service Information

The family of Stanley Dodds Gorrie created this Life Tributes page to make it easy to share your memories.

It is with great sadness we announce the passing of Stanley Dodds...