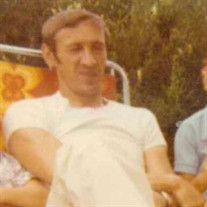 Steven William Paul Wolanski, born in Alberta to Ukrainian/Polish immigrants, and raised by widowed mother, Ann (née Popyk). Steve had high regard for his mother who struggled to support the family. She chased away Russian soldiers from her family farm in the old country circa early 1900’s, with a pitchfork, and throughout life she could beat the tar out of all threatening individuals. As a young man Steve signed up with the Canadian Navy, as aircraft mechanic. Later becoming a talented welder with Ironworkers Local 736 Hamilton, being lean but strong like Popeye. He had great appreciation for fellow Ironworkers, spoke highly of First Nations members, and this respect was passed down. Steve shared some of their special abilities, being fearless working at extreme heights. He married Muriel Wolanski (nee Edwards). Father to David Wolanski (Kim) and Paul Wolanski, Uncle to Ken Wallace (Dina), and grandfather to Lindsay and Sydney. Pre-deceased by sister Mary and brother Walter. Steve was not a regular guy. In younger years he took the dog and dropped in on friends without calling, rid the garage of rats by revving Ford Capri while he was still inside garage, thought fridge leftovers were still ok after a month, and built a sun porch for his cats. Steve was adamant his children cannot receive calls after 9PM, but would yell for cats to come in at 3AM. In the 1980’s, he fabricated 40 ft steel bridge sections in the family driveway, and delivered to clients with his Pinto. We are proud, but received teasing at the time – “why doesn’t he build a bridge to your neighbour’s house?” For the first delivery, the bridge fell off on the highway because Steve took a chance that it didn’t need to be tied down. He eventually fabricated larger bridges at golf courses that are still in use today. He remained active all his life, walking many miles on a regular basis up to age 80, and later limited it to nearest Tim Horton’s. We would like to thank Ryan, Debbie, Adriana, Lachlan, and other staff at Dundas Retirement Place. Many thanks to Olivia of LHIN, other support workers through LHIN, Nilusha from CBI, Karin from Circle of Life Cremation and Burial Centre, and the staff at General Hospital.

Steven William Paul Wolanski, born in Alberta to Ukrainian/Polish immigrants, and raised by widowed mother, Ann (née Popyk). Steve had high regard for his mother who struggled to support the family. She chased away Russian soldiers from her... View Obituary & Service Information

The family of Steven William Wolanski created this Life Tributes page to make it easy to share your memories.

Send flowers to the Wolanski family.