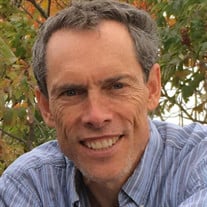 Beloved husband (Rita Bertoldi), father (Emilia Hurd), father-in-law (Kevin Cooper), new grandfather to Baby Linden, brother (Molly, Jack, Jim,) uncle, colleague, friend and mentor, cyclist extraordinaire, Commonwealth Scholar, Professor of Mathematics at McMaster University, and son of the late Dr. Robert Allan Hurd and Ann (Puxley) Hurd. Tom died way too soon on April 28, 2022, at age 65. A bolt from the blue – two weeks after the birth of his first grandchild, a few weeks after negotiating his retirement, Tom was diagnosed with a brain tumor on March 20, 2022, later to be confirmed to be a grade IV glioblastoma. It consumed Tom with devastating speed despite his steely resolve. Strong arms and loving hearts surrounded him and kept him at home, until his last few days at St Peter’s Hospital. And now there are memories. Tom was a risk-taker from an early age. Growing up in Ottawa, he demonstrated his nascent interest in physics and the laws of nature, hurtling down the tennis court hill on a tricycle at age 3, and later, with “no-hands” descents in the Fairhaven quarry – formative experiences to his approach to life. His love for fast acceleration and adrenaline fueled many a bike ride and adventure. Tom ascended and descended Mont Ventoux in France three times, and in recent years, logged more than 47,000 km on his bicycle. In another reality, he would have been riding 100 km in the Paris to Ancaster bike race on Sunday, April 24. Only it wasn’t meant to be. Tom and Rita met in 1977 through the Science ‘44 Student Housing Co-op at Queen’s University in Kingston. His domain was science, hers was arts. They started their life adventures hitchhiking across Europe the summer before Tom went to Oxford University as a Commonwealth Scholar. At Oxford, Tom was a member of Roger Penrose’s research group on General Relativity. After his doctorate in 1982 he was the Weir Junior Research Fellow in Mathematics at University College. In 1984, Tom accepted a postdoctoral fellowship in mathematics at the University of British Columbia. September 1985 marked the beginning of a new phase for both Rita and Tom with the birth of their daughter Emilia. Moving to McMaster University in 1989 enabled closer family ties and in 1996 Tom was promoted to full professor at McMaster, where he stayed for the remainder of his career. Visiting professorships, sabbaticals and conferences throughout Tom’s career were gateways to new experiences and provided opportunities for lifelong friendships which enriched the whole family. Tom’s research interests transitioned to mathematical finance, where in recent years he focused on the general area of systemic risk, summarizing his work on network models in his 2016 book Contagion! Systemic Risk in Financial Networks. When the COVID-19 pandemic started, he quickly realized that contagion modelling for banking networks had important lessons for the spread of infectious diseases. He became a key contributor to the Mathematics for Public Health initiative at the Fields Institute in Toronto. Sometimes described as quirky and brilliant, Tom was a colleague, teacher, and mentor who worked to connect people and create possibilities. His passion for research animated conferences and lectures across the globe, and his enthusiasm for teaching covered thousands of blackboards, and produced leaders and thinkers in the field beyond the lecture hall. In his personal life, Tom was an amazing dad who instilled a sense of confidence and adventure in Emilia from early days. He also taught Emilia many things – how to run, ski, build Lego hats, and climb trees. They shared many adventures, some close to home, and others further flung. An important father-daughter trip took them to the Lake District in England. They walked the fells and byways, and stayed at Black Sail youth hostel, a special place from Tom and Rita’s Oxford days. Tom was also a man of many talents, interests, and skills, both practical and fanciful: Designer and builder, bicycle mechanic, logistics manager, maker of ‘Mickey Mouse’ pancakes for very special people, pastry chef and peach pie maker, cryptic crossword solver, wordsmith and punster, lover of birds and butterflies, partner, guide, fact checker. Rita and Tom shared morning coffee almost every day, sometimes in a canoe. Tom always thought of Hamilton as home. He reveled in the cycling that jumpstarted each day with his Westdale Wastrels buddies. These rides took him up the Escarpment on his favourite bike routes including the “Hurd Locker” and especially the Sydenham Hill climb. Following Tom’s diagnosis, fellow cyclists became fellow walkers and front porch companions. Meals appeared to keep “Team Tom” going. We thank you all. Thanks also to connectors of dots: Dear friends, doctors, nurses and the McMaster community mobilized teams with lightning “Tom-time” speed to donate his beautiful math brain to the Sheila Singh lab at McMaster University. We are honouring Tom’s inquiring mind and generosity of spirit to help advance the study and research of this awful disease. Every summer the extended Hurd family converges at our beloved East Ragged Island, Nova Scotia, a magical place that resonates with four generations. At the end of the road, there is an open invitation to read the sky, to contemplate the speed of the fog bank as it rolls in, to consider the waves and watch the birds. To address your sorrows and count your blessings. A gathering place where drinks on the porch after a long walk or a swim in the Deep Hole have created bonds that celebrate and console and make life replete. Where we can see the Magic Island, or a glin dancing on the water. Where we can feel Tom’s presence. A celebration of Tom’s life will take place at a later date. In lieu of flowers, please consider a donation to the Brain Tumour Foundation of Canada. https://www.braintumour.ca/

The family of Dr. Thomas Robert Hurd created this Life Tributes page to make it easy to share your memories.