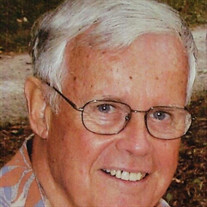 It is with exceeding sadness that we announce the death of Thomas (Tom) Allen Phillips, in his ninety-first year, at The Wellington, in Hamilton, Ontario. Beloved husband, for sixty-seven wonderful years, of the late Betty Phillips; father of Robert Phillips (Joseph Hisey), Donald Phillips (Leena), and Leslie Phillips (Ken Skarupa); grandfather of Sarah & Scott Phillips, and Matthew Gryzwacz (April) & Benjamin Gryzwacz (Jodi); and great-grandfather of Lucas Gryzwacz and Jason Gryzwacz. Son of Lillian and Dorland Phillips, Tom grew up in Hamilton, attended Hamilton Technical Institute, where he studied with artist-educators Hortense Gordon and Jean Wishart, and initially worshipped at New Westminster Presbyterian Church. Tom married Betty (Johnston) in 1952, and raised their three children in Hamilton, then Mississauga. Tom and Betty were founding members of Chedoke Presbyterian Church, Hamilton, and long-time members of Dixie Presbyterian Church, Mississauga. After high school, Tom’s artistic talents led him to train in display/visual merchandising at Eames and Sons clothiers, in Hamilton, then at the T. Eaton Company. Merchandise displays in Eaton's windows were a speciality of Tom's. In 1968, after working in display and advertising departments at Eaton’s, Hamilton, a promotion led Tom to Toronto and the family settled in Mississauga. Tom eventually managed visual merchandising in the newly opened flagship store, in the Eaton’s Centre; later, he oversaw visual merchandising and interior designs for new Eaton’s stores across Canada. Highlights of Tom’s 42-year career: dressing as Mother Goose and riding a float in the Eaton’s Santa Claus Parade; work-related travels to New York City, Italy, Japan, and California for "Uncrate the Sun;" decorating for Christmas; and Broadway theatre during business trips to NYC. Beyond work, Tom's artistry was constantly evident: beautifully decorated homes (his and other people's); creating settings for and directing many Christmas pageants; devising original costumes for Hallowe'en and other celebrations; stunning flower arrangements; staging fashion shows, weddings, birthdays, and anniversary celebrations; and seasonal displays for the St. Elizabeth's Village show case. Over many summers, Tom, Betty & family enjoyed cottage life on Lake Couchiching—including water skiing, boating, sun bathing, and Lock 42 picnics. An extensive European trip, in 1972, was a remarkable episode for Betty and Tom. After retiring from Eaton’s, Tom & Betty moved back to Hamilton, to live in St. Elizabeth’s Village. The travel bug continued to bite Tom and Betty as they enjoyed innumerable Caribbean and west coast cruises with close relatives and longtime friends, as well as trips to Ottawa, Kelowna, and other Ontario localities. Inevitably, whenever a family gathering, celebration, dinner party or vacation happened, Tom could be spotted with camera in-hand; over the years, he amassed thousands of photos and slides that remain as evidence of a life well-lived and of a man who cherished Betty, his family, and long-time friends. Bob, Don, and Leslie would like to extend their sincere thanks to the amazing caregivers and staff of The Wellington, truly courageous and compassionate frontline workers. Donations in memory of Tom can be made to the Alzheimer's Society of Canada. https://alzheimer.ca/en

It is with exceeding sadness that we announce the death of Thomas (Tom) Allen Phillips, in his ninety-first year, at The Wellington, in Hamilton, Ontario. Beloved husband, for sixty-seven wonderful years, of the late Betty Phillips; father of... View Obituary & Service Information

The family of Thomas Allen Phillips created this Life Tributes page to make it easy to share your memories.

It is with exceeding sadness that we announce the death of Thomas...

Send flowers to the Phillips family.