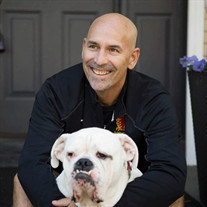 It is with great sadness that his family announces Casey's peaceful passing at Carpenter Hospice in Burlington, on Thursday, August 31, in his 51st year, after living with late stage cancer for 7 years. He was the beloved husband of Bryna (Repath) Cosgrove and the cherished father of Evan, Jack and Kate. Casey was the dear brother of Paul (Kim), Marty (Lesley) and Rhonda Radice (Joe), much loved by in-laws Peter & Judy Repath, brother-in-law, David Repath (Renata) as well as numerous nieces and nephews. He was predeceased by his parents Elizabeth and James Cosgrove. Professionally, Casey was Associate Professor at the University of Guelph, teaching leadership in the Faculty of Business, and was a director at Canadian Centre for Financial Literacy (PROSPER CANADA, formerly SEDI) where he developed the program and obtained funding for the Centre (a national program to help low-income families). Casey made numerous and profound contributions to his community in volunteer capacities, including as a hockey and baseball coach, a Vice-President of Lung Cancer Canada, a board member of the Nelson Youth Centre and founder of the Nelson Baseball Park Neighbourhood Group. Casey was also a member of the panel on the weekly Cogeco program "The Issue”. As an ardent supporter of the Terry Fox Foundation, he led the effort to establish the Terry Fox mile marker on Burlington’s waterfront, while also raising funds for the Terry Fox run, via Team Casey. Casey’s special connection with Terry Fox began in 1980 when, as a young teenager, he ran beside Terry as he came through Burlington. Perhaps his greatest contribution though was instilling in his children and in others the importance of being a contributing member of society. In Casey’s words, “This disease will not take away my ability and wish to inspire.” Casey’s message of HOPE, his zest for life, his sense of humour, and his unfailing love and concern for his family and friends showed that he lived what he taught, leading by example. In his son Evan’s words, when he was asked by a classmate if it was true that his dad was dying of cancer, “No, my dad is living with cancer.” The family is thankful for the incredible care Casey received over the last 7 years (Juravinski Cancer Centre, Princess Margaret Cancer Centre) and in his final days (Carpenter Hospice). In particular, we are thankful to the individuals who worked so hard to find, plan, and administer the trial treatments that gave Casey such a full and ‘healthy’ life for so much of his post-diagnosis life. Cremation has taken place. Visitation is at Pub 21, above the Wave Twin Rinks on September 3rd, 2:30 – 4:30, with an ice pad available for those who wish to go for a skate. A celebration of Casey’s life will be announced in the coming days via Facebook. Memorial donations to the Terry Fox Foundation or The Carpenter Hospice would be appreciated. http://www.terryfox.org/contact-us/ https://www.thecarpenterhospice.com/support-us/make-a-donation/

It is with great sadness that his family announces Casey's peaceful passing at Carpenter Hospice in Burlington, on Thursday, August 31, in his 51st year, after living with late stage cancer for 7 years. He was the beloved husband of Bryna (Repath)... View Obituary & Service Information

The family of Vincent Casey Cosgrove created this Life Tributes page to make it easy to share your memories.

It is with great sadness that his family announces Casey&#39;s peaceful...

Send flowers to the Cosgrove family.