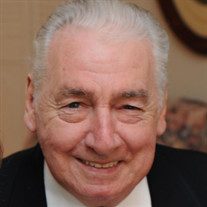 After a long happy life, Bill passed away on November 25th, 2017, surrounded by and in the arms of his loving family. He was a devoted husband, father and granddad, and was considered a second father and granddad to many. Bill is survived by his loving wife of 56 years, Florence (nee Speziale) and their children Mark (Amy), Mary Anne (Brad), and Joe (Angela). Bill is the proud ‘Papa’ of three grandchildren Shane, Davis and Cole. Son of the late James and Mary Jeffrey, Bill is survived by his brother Bob (deceased wife Marjorie) Jeffrey, and predeceased by his brothers Jimmy (survived by wife Joan) Jeffrey, Jack (Evelyn) Jeffrey, Tom (Elsie) Jeffrey, Elsie Lavery, Walter (Betty) Lavery and Aileen (Stan) Lusk. He was also very close to his pre-deceased Speziale in-laws including Peter (Marie) Speziale, Connie (Joe) Curto, Grace (Angelo ‘Gig’) Curto, Jack (Mary) Speziale, Jackson (Laura) Speziale, Anita (Sam) Scime, Angelo ‘Curly’ (Nora) Speziale, Rose (Tony ‘Mugsy’) Marasco and Sam (Yolanda) Speziale. Bill was adored by his many nieces and nephews from both the Jeffrey and Speziale clan. He will be sadly missed by his extended family Maria, Trevor, Alexandra and Adam Cook. His quick wit and sharp humour was a hallmark and he was never short of an opinion or comment, which kept everyone on their toes. Bill retired from Dofasco in 1991 after a 40-year career, and was co-owner of the House of Java with Bob, Marjorie and Florence. Those who knew Bill also knew that he had a big heart and was always there when help was needed. He had passion for his Airedale Terriers (Duffy, Simba and Kramer), cooking Italian Food with Florence and roasting peppers in the backyard with his 1873 and Pepsi. A special thanks to dear friends Joe and Patricia Papalia for their incredible friendship and support over the years – they were always the first ones on hand to help out. Thanks to the staff at Shalom Village for their care of Bill during his time there, especially over the last few days of his life. A funeral service will be held on Friday December 1st at 11 am at All Souls Parish, 21 Barton St. W. in Hamilton followed by a celebration of life at Liuna Station, 360 James Street North, Hamilton. In lieu of flowers, donations to ATRA (Airedale Terrier Rescue and Adoption) or Out of the Cold of Hamilton would be greatly appreciated. https://www.aire-rescue.org/support-atra/make-a-donation-to-atra http://hamiltonoutofthecold.ca/donate/

After a long happy life, Bill passed away on November 25th, 2017, surrounded by and in the arms of his loving family. He was a devoted husband, father and granddad, and was considered a second father and granddad to many. Bill is survived by... View Obituary & Service Information

The family of William (Bill) Vincent Jeffrey created this Life Tributes page to make it easy to share your memories.