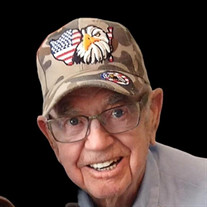 At 4:20 am, at the age of 97, Dad took his last breath, then, in the final chapter of a love story for the ages, walked right into the arms of his darling Renie, never to be parted again. Dad was born in Yonkers, NY, the youngest of three children, to mother Helen and father Albert Harvey (whom he lost at the age of twelve). Through the years he remained close to his siblings, Bruce (Jean, Mary), and Cathy (J Harry Wood) and enjoyed reuniting whenever possible. Dad tried hard to follow Bruce into the service but was unable to pass the physical. Although he was disappointed, he soon turned his eye toward a career in baseball and played professionally for several years, first as a third baseman, then as a pitcher. In 1947, while playing Triple A ball for the Brooklyn Dodgers affiliates, he came to Canada to play in Granby QC, where he quickly discovered his love for the game was now second to his love for a pretty little Canadian girl named Irene Jean Hobbs. It didn’t take long for either of them to realize they belonged together and they married two months later in Bronxville NY, and settled in Renie’s hometown of Granby. As much as Bill loved the game, he didn’t want to be away from home so often, and by the time their first son Wayne was born he had given up his baseball career to focus on family. Wayne was quickly followed by Randy, and Brad, then 7 years later, a daughter Beth. In 1968 the family moved to Dundas, ON, where Mom and Dad resided in the same home for nearly 50 years (at which time they moved into a retirement home and eventually into St. Joseph’s Villa.) Dad continued his love affair with baseball by managing the Dundas Chiefs in the early 70’s and at the age of 97 still remembered the name of every player he managed! After a heart attack in 1979, he began a daily walking regimen, up through the town and back again. He was hard to miss in his Yankees attire, including the ever-present ball cap. He always had a friendly hello for those he passed along the way, and could often be spotted at the bench by the banks chatting with passers by. They didn’t come much friendlier than Dad. Later, at the tender age of 96, he could still be seen walking up King St, in his ball cap, pushing his Renie uptown in her wheelchair. Dad was predeceased by his son Randy, and leaves behind his sons Wayne (Carol), Brad (Linda), and daughter Beth (Dave). He will be missed by all his grandchildren, Joel, Travis, Sarah. Starr (Matthew Anderson), Jay, Cole and Sasha (Frazier King), as well as great granddaughters Olivia, Farah, Luna and ‘baby King’! Our lives will never be the same with both you and Mom gone now, but our hearts are peaceful even as we miss you! We were and are blessed with a love beyond measure and we couldn’t be more grateful. Rest easy, Dad. And know that as long as there is a ballgame to watch, you will be right there in every pitch we see. ❤️⚾️❤️🧢❤️

At 4:20 am, at the age of 97, Dad took his last breath, then, in the final chapter of a love story for the ages, walked right into the arms of his darling Renie, never to be parted again. Dad was born in Yonkers, NY, the youngest of three children,... View Obituary & Service Information

The family of William Hamilton Harvey created this Life Tributes page to make it easy to share your memories.

Send flowers to the Harvey family.