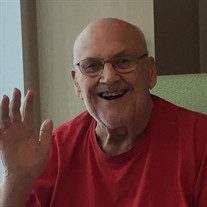 Loving father of me, his youngest daughter, Jill Puskas. My father, Bill Puskas, passed away Saturday, January 12th, 2019, he was 82 years old. Bill was quite ill the past four years, having had 2 different strokes and suffered from both COPD and Congestive Heart Failure. This last event started with a fall. He passed quickly of a massive heart attack at the Hamilton General Hospital. Thankfully he didn’t suffer. Bill was a Halton Regional Police Officer, retiring in 1993 after 33 years of service. He lived in Burlington the majority of his life, where he enjoyed doing volunteer work for the SERTOMA Club. He also donated blood to Canadian Blood Services 100 times for which he received a plaque of recognition. He loved going to the gun club. He entered several competitions and he’d even reload his shotgun shells in the basement of the house. Dad was still going to the gym into his mid 70’s working out at Family Fitness, then at GoodLife. He spent his last year in Assisted Living at the Chartwell Georgian, in Dundas, ON. He loved it there. They affectionately called him “Big Bill”. He got to spend his days helping out folding monthly calendars, cleaning up after parties and most of all telling his stories and having fun. A huge thank you to all the staff for making him feel like family. There are too many of you to mention. Please know that he loved you all. Dad had a soft spot for animals. We always had a dog in the house growing up. Boy, did he love my dog Scruff and he loved him! The mention of his name “Bill” wound Scuff up every time. When they were together, Scruff would sit right next to Dad and never leave his side. I foster for Pantry Four Paws, and Dad liked hearing all my adventures with my newest cat or kittens. I’d load him up with kittens whenever he came to visit. He is survived by both his ex-wife Joan Puskas and daughter Kim Puskas of Burlington; sister-in-law Joanne Puskas, and nephews Andy Puskas and Dave Puskas. My heart is broken at the loss of my best friend and biggest supporter. I knew, without a doubt, that he always had my back and me his. He will always be with me, and I will always love him. I am, and will always be, proud to be my father’s daughter. It was my fathers wish to have no funeral or visitation. To be sent off only by myself. I will be respecting those wishes. Donations in his memory can be made to: www.pantryfourpaws.ca/donate/

Loving father of me, his youngest daughter, Jill Puskas. My father, Bill Puskas, passed away Saturday, January 12th, 2019, he was 82 years old. Bill was quite ill the past four years, having had 2 different strokes and suffered from both COPD... View Obituary & Service Information

The family of William Bill Puskas created this Life Tributes page to make it easy to share your memories.

Loving father of me, his youngest daughter, Jill Puskas. My father,...

Send flowers to the Puskas family.