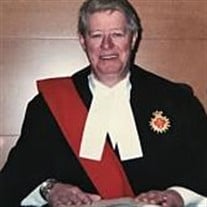 THE HONOURABLE C. RAYMOND HARRIS It is with profound sadness, honour, love and a heavy heart that I announce the passing of my loving and devoted husband of 30 years. My best friend. Ray Harris. Over a career spanning almost 50 years Ray has enriched Hamilton with his enthusiastic support of a variety of endeavours – all aimed at making Hamilton a better place. Whether it was giving the little guy a voice in our judicial system as a storefront lawyer, helping ordinary people in struggles against City Hall, supporting the arts with time and talent, beautifying downtown Hamilton, breaking a 50 year legal impasse between Hamilton and the Port, dispensing justice from his common-sense perspective as a Justice of the Superior Court, or making sure disadvantaged kids got a shot at success – Ray has been a driving force. Ray played a central role in community organizations and activism in the 1970’s during what is known as the “York Boulevard Urbanization Plan” in Hamilton. In this capacity, Ray helped organize displaced home and business owners and established a series of pro-bono community legal clinics and was instrumental in the formation and implementation of the Ontario Legal Aid Plan. As such, Ray was a pioneer in recognizing and addressing the issue of access to justice for all residents of Ontario. As Chair of the Hamilton Downtown BIA, Ray worked tirelessly to return the downtown to its former glory. From his offices on the top floor of the Royal Connaught Hotel overlooking the Gore, Ray fought for the restoration of the old Gore Park Fountain and spearheaded a fundraising drive that brought the historic monument back to life. As Chairman of the Hamilton Harbour Commission, Ray led, and resolved to the City of Hamilton’s and the Federal Government’s satisfaction, the long-standing dispute concerning the jurisdiction, ownership and management of the City of Hamilton harbour lands, thus ending a complicated dispute that had plagued the harbour lands for decades. Ray provided countless hours to the task at the Hamilton Harbour Commission, at no small cost to his law practice; but in typical Ray Harris determination, he selflessly saw the job through to a successful conclusion. Ray has been a supporter and participant of the performing arts in our community as an actor (both amateur and professional), producer, director, stage hand and curtain-puller. Ray has been involved in community theatre in Hamilton, most notably with the Hamilton Players’ Guild, and Hamilton Theatre Inc. In addition, Ray organized, produced and directed the Hamilton Lawyers’ Club in various productions, such as Twelve Angry Men, to great public success. Following his highly acclaimed appointment as Superior Court Justice, Ray set about delivering the same blend of compassion, common sense and street smarts that has been the hallmark of his career as a litigator. Always the champion of the underdog, Ray’s decisions reflected his abhorrence of violence and bullying. He took a no-nonsense approach to sentencing those who terrorized the weak and addicted. His decision in a 2008 sentencing of a violent crack dealer earned Ray editorial and wide-spread community praise. His decisions in civil matters equally reflected his sense of balance and fairness. In conjunction with the Hamilton Community Foundation and other concerned Hamilton lawyers, Ray established a fund to aid and benefit the children of the City of Hamilton. All proceeds from Hamilton Lawyers’ Club theatrical productions, as well as donations from other fundraising events are now dedicated to this fund, which is at this time substantial in nature and growing every year. This has not only raised the public profile of the Hamilton bench and bar, but has generated an additional and much-needed funding source for the charitable endeavours carried on by the Lawyers’ Legacy for Children. I pay great tribute to the staff at St. Peter’s at Chedoke Long Term Care. Their kindness, care and compassion have been greatly appreciated. I also thank our amazing PSW for her dedication to Ray’s well being. As well, I thank our fantastic family and friends for their love and support through this difficult time. Ray leaves behind his family and his many supportive and wonderful friends who will all greatly miss him. As well as my broken heart. In accordance with Ray’s wishes, cremation has already taken place. In lieu of flowers and if friends so desire, memorial donations may be made to The Lawyers’ Legacy for Children in Hamilton, or The Hamilton SPCA in Ray’s honour and greatly appreciated. Please join me in a Celebration of Ray’s Life at Ancaster Mill, 548 Old Dundas Rd., Ancaster on Thursday, May 30th from 6 p.m. – 9 p.m. With Love from his Bride https://hbspca.com/donate/ways-to-donate/ https://www.hamiltoncommunityfoundation.ca/grants/grant/lawyers-legacy-children/

THE HONOURABLE C. RAYMOND HARRIS It is with profound sadness, honour, love and a heavy heart that I announce the passing of my loving and devoted husband of 30 years. My best friend. Ray Harris. Over a career spanning almost 50 years Ray has... View Obituary & Service Information

The family of Raymond Harris created this Life Tributes page to make it easy to share your memories.

THE HONOURABLE C. RAYMOND HARRIS
It is with profound sadness,...